Survey: While Trust in Connected-Automated Vehicles Low, Savings Could be High 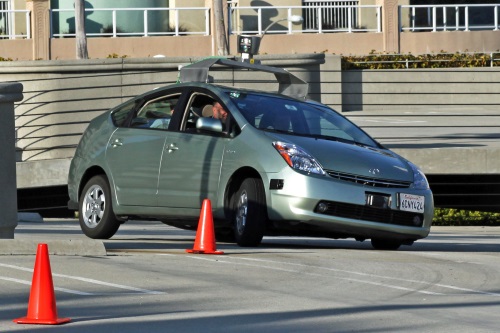 Two recent polls conducted by insurance firm Esurance indicate that even though a large percentage of motorists remain uninterested in giving control of the steering wheel over to self-driving or connected and autonomous vehicles – called CAVs for short – the potential savings of doing so could amount to several thousand dollars per year, along with safety benefits that state department of transportation officials feel will boost such savings even further.

“Safety is the most important consideration” regarding the emerging deployment of connected and autonomous vehicles, noted William “Bill” Panos, director of the Wyoming Department of Transportation and chair of the Committee on Transportation System Operations for American Association of State Highway and Transportation Officials, during Congressional testimony on June 13.

“These new technologies have the potential to decrease crashes and fatalities significantly and positively influence the safety of not only vehicle occupants, but also highway maintenance and construction workers, bicyclists, and pedestrians,” he said. “While the prospect for safety improvement is exciting, we are also acutely aware that this is truly innovative technology and there are still uncertainties surrounding it.”

The population of active CAVs is expected to rise sharply over the next eight years, according to a recent white paper by Juniper, which predicts that by the end of 2026, there will be more than 10 million autonomous vehicles alone on the road in the U.S., with more than 50 million of them on the road worldwide.

According to Esurance research, in terms of costs savings, the “best-case” scenario whereby a family gives up their car in favor of driverless ridesharing could save them $4,100 in annual transportation costs. Other research cited by the insurance firm indicates that a 20 percent improvement in efficiencies of “personal transportation systems” would generate a 5 percent increase in household incomes, though the “attraction” of saving time and money would depend on where those families reside – cities, suburbs, or rural areas – and their willingness to embrace ridesharing over car ownership.

However, a second poll by Esurance found that there is a “general perception” that people don’t trust CAVs — and can’t imagine doing so in the future. In that survey, 83 percent of those polled expressed “low” or “no interest” in giving up control behind the wheel, with a “fear of the unknown,” especially among different generations, a major issue.

Esurance’s research found that younger survey respondents, aged 18 to 34, were three times more likely to embrace fully autonomous vehicles versus adults aged 55 and over. And parents were 60 percent more open to relinquishing driving control than non-parents to gain the benefits of multi-tasking, the company said.

The firm also analyzed 400,000 tweets around driverless tech from February to April this year and found that 17 percent of the conversation related to “fears,” while another 20 percent of those tweets referenced fully autonomous vehicles as still being in the “research and development” phase.

[Side note: Transportation TV reported on a separate survey released by AAA back in May that found varying degrees of reluctance on the part of motorists to ride in self-driving vehicles depending on age and gender.]

“There is no question that CAVs hold tremendous promise to transform and even disrupt transportation as we know it; however, there are many unknowns yet to be fleshed out for anyone to be too certain about the future of CAVs,” Panos added in his June 13 testimony.

Several potential issues that he touched on include:

Yet Haden Kirkpatrick, head of strategy and innovation at Esurance, noted in a statement that some automakers are already showing a “willingness” to accept liability for accidents that can be attributed to the CAV technology, which indicates both the “high faith” in the long-term safety of the systems and an understanding that human error accounts for 94 percent of all driving accidents.

“The more that human error is removed from the equation, the safer our roads will become,” he said. “Like with most new technology, we’ll see consumer perceptions evolve and adoption accelerate as the promised benefits of self-driving cars are realized.”