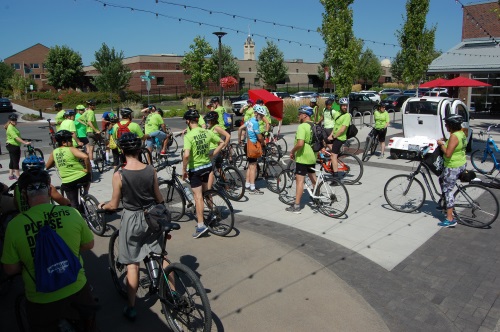 The American Association of State Highway and Transportation Officials and technology company Iteris organized a three-hour long “mobile workshop” on July 17 during the group’s 2018 Joint Policy Committee Meeting in Spokane, Washington, to explore that city’s growing bike infrastructure and highlight what can be done to foster its further development.

Barb Chamberlain, the director of the active transportation division within the Washington Department of Transportation, helped guide 35-plus riders on a 10-mile ride along a combination of bike/pedestrian-only trails and city streets to illustrate the infrastructure needs of Spokane’s Master Bike Plan that seeks as part of the city’s six-year capital improvement plan to create a “complete grid” of bike- and pedestrian-only pathways.

“State DOTs are a key facilitator of such networks as they often own the most ‘direct grades’ for those trails,” she explained to the AASHTO Journal. “WSDOT is partnering with local agencies here in Spokane to help develop a complete ‘bike/walk’ network so people can travel from one end to the city to the other without having to drive a car.”

The 10-mile bike trip included a stop at Spokane’s Kendall Yards development; a 78-acre residential area crafted from a former rail yard and built with deliberate proximity to the city’s Centennial bike/pedestrian trail to provide residents with quick access points to downtown and suburban locations without having to rely on motorized vehicles.

“It’s what we call a ‘trail-ordered community’ in that it is not car-focused,” Chamberlain explained. “The key focus it to build a trail network that will give you 20-minute access to major city locations by bike. It’s part of the city’s six-year plan to make the Centennial trail the center of a regional trail network for urban residents.”

“It’s about improving traffic signal timing and activation specifically for bicyclists,” he told the AASHTO Journal. “That way they don’t have to dismount their bicycle on a busy road to activate the pedestrian crossing signal. The signal sensor will recognize a bicyclist is there at the light and lets the bike rider know it ‘sees’ them, making intersection crossings safer.”