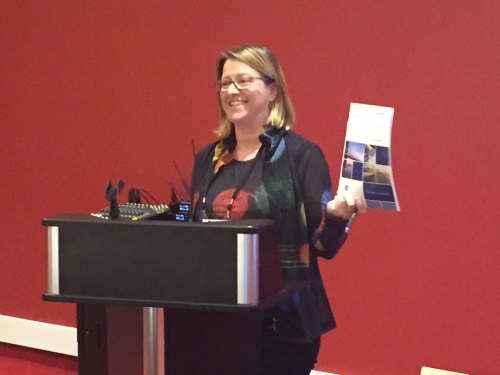 Caitlin Hughes, director of the Federal Highway Administration’s office of freight management and logistics, noted in a presentation at the American Association of State Highway and Transportation Officials 2018 Joint Policy Committee meeting in Spokane, Washington, on July 18 that a nationwide truck parking survey now expected to start this August is going to be “expanded to ports” to see what port-generated truck parking needs will be, in addition to those along the nation’s interstate highway system.

“We’re going to look at the [parking] needs of drayage and short-haul local [trucks] drivers as well as long-haul operators,” she said. “Truck parking is a safety issue – we need to solve this issue but we cannot do it alone. We need to do it in partnership with the states and the private sector. We need to work together to meet these [parking] needs. All states have this problem.”

Speaking before AASHTO’s Special Committee on Freight, Hughes (seen below) also discussed some of the particulars of FHWA’s very first “Highway Freight Conditions and Performance Report,” delivered to Congress back on July 6. She also emphasized that only 36 or 37 states have established freight advisory committees and expressed the hope that more would soon be formed.

“With rapid change going on in the freight world – with drones, autonomous vehicles, and truck parking just some of the major issues – it is really critical to have them in more active engagement,” Hughes said. “I urge you to keep going with them or get them up and running – they are critical to making sure freight projects integrate well with communities and meet needs of freight stakeholders.”

Turning back to the truck parking survey, she said it should also help FHWA better identify freight congestion points on the national highway system. “We get used to bottlenecks – we create work-arounds for them,” Hughes explained. “So there has to be a dialog between all of us. There are so many different best practices out there. Creative thinking needs to go into how to make this better for everyone.”

Dan Murray, vice president of the American Transportation Research Institute, noted during a presentation following Hughes’ that “we are in a crisis stage now” regarding the truck parking shortage, with ATRI’s data indicating truck drivers search for parking on average for 56 minutes per day, which represents an “opportunity cost” of $4,600 annually in terms of lost wages per truck driver; a number Murray said can represent up to 10 percent of a truck driver’s annual salary.

Heavy rains in Kentucky resulted in severe flooding and runoff causing slides, slips, embankment failures, and erosion on highways in 38 counties across the eastern and southeastern portions of the state; areas FHWA said are “very rural and mountainous,” making it difficult to access the sites.

The $3 million in “quick release” funding will be used to pay for the repairs done to restore essential traffic and prevent additional damage at emergency repair locations across the Commonwealth.

Total damage from this event is estimated at $29.8 million, the agency said, so the “quick release” emergency funding is considered a “down payment” on the costs of short-term repairs while the state continues damage assessments for long-term repairs.