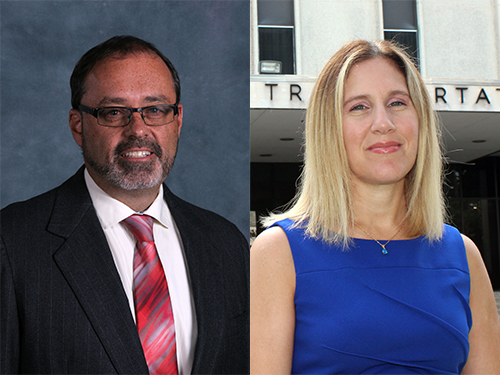 The American Association of State Highway and Transportation Officials recently appointed Dallas Hammit and Amy Tootle as the chair and vice chair, respectively, for the group’s committee on construction, which ensures that AASHTO’s guide to specifications for construction is kept up-to-date with the latest “best practices” gathered from its state DOT members.

Hammit joined ADOT in June 1999 as senior resident engineer in the Yuma district. He later served both the Yuma and Prescott districts as district engineer. In 2009, Dallas became deputy state engineer for operations, then senior deputy for development in 2012 before being appointed state engineer in 2014.

Vice Chair Tootle is the state construction engineer at the Florida Department of Transportation, a position she’s held for just over three years and one in which she oversees a technical staff of eleven specialists and engineers whom develop construction policies and procedures for the agency.

Tootle, who joined FDOT in the fall of 2010 after an 11-year career in the private sector, told the AASHTO Journal that for the past five years she has focused on “leveraging technology to not only become paperless statewide on construction projects but advancing new technologies to increase efficiency and make our work zones safer for all who enter them.”

A registered civil professional engineer and certified public manager, Tootle is also a 1999 graduate of the University of Florida with a Bachelor of Science degree in environmental engineering.