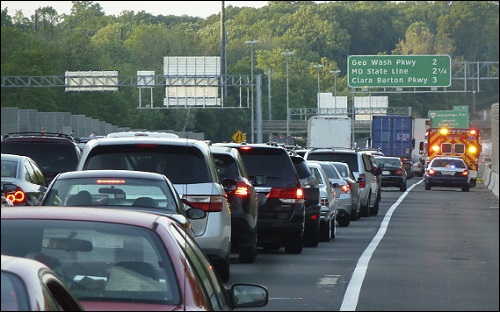 The broad infrastructure proposal unveiled July 23 on Capitol Hill by Rep. Bill Shuster, R-Penn., chairman of the House Transportation and Infrastructure Committee, also serves to underscore a long-running debate over how to return the Highway Trust Fund to solvency.

“The HTF is in serious trouble,” he noted in the “vision statement” that accompanied his proposal. “The Congressional Budget Office estimates that it will go insolvent, yet again, as soon as the fall of 2020 and will see a cumulative shortfall of more than $160 billion by the fall of 2028.”

Shuster proposes increasing federal motor fuel taxes on gasoline and diesel by 15 and 20 cents, respectively, then indexing those taxes for inflation. However, those fuel taxes would be completely phased out after ten years and replaced with a mechanism recommended by the Commission, along with “new levies” on electric vehicles and bicycles – a 10 percent fee on the wholesale price of electric vehicle batteries and a 10 percent user fee on the wholesale price of adult bicycle tires – as well as reinstating the 4.3 cent per gallon fuel tax on diesel fuel (indexed to inflation) used by passenger trains eligible for funding under certain federal public transportation programs.

Yet recent commentary by several state department of transportation executives and other industry experts indicate that any such federal fuel tax increases may be coming too late to effectively shore up the HTF.

“We’re in agreement that the gas tax at the federal level is in need of CPR – it’s been kept alive, barely, but it’s not meeting the [transportation] system’s needs,” noted Pete Rahn, transportation secretary and Maryland Transportation Authority chairman, during a panel discussion held July 18 at the American Association of State Highway and Transportation Officials 2018 Joint Policy Committee meeting in Spokane, Washington.

“The gap now as to where it is needed compared to where it is at is a reality we can’t address. That is the situation we are approaching,” he explained. “States are working on their own fuel taxes, but our message is not resonating with Congress. We are always having to try and explain why transportation is important – and I’ve been doing that over the last 24 years I’ve been involved in transportation. But now we’ve reached the point where the credit cards are full. Now we must really talk about actually paying for the system we have.”

Leslie Richards, secretary for the Pennsylvania Department of Transportation, noted during the same panel discussion that by 2020 Pennsylvania will need $7.5 billion in infrastructure money just to get its transportation system into a “good state of repair; but the gas tax just gives us $2.5 billion.”

As a result, “every day, we have to make priorities,” she explained.  “There’s no single answer, no single solution.”

Greg Slater, administrator of the Maryland Department of Transportation’s State Highway Administration, added that “we are on the brink of a core challenge: what is our planning going forward? There are many unknowns so we must maximize what we have out there. We have to design a practical transportation system for everyone.”

To that end, Sen. Tom Carper, D-Delaware, who is the ranking member on the Senate’s Environment and Public Works Committee, believes that replacing the current federal fuel tax with a vehicle miles traveled/road user charge is the best funding solution going forward for the HTF.

“We have a huge demand for infrastructure needs – but what we don’t have is the will to pay for them,” he explained during a July 11 hearing. “Historically, we’ve used user fees – in this case fuel taxes – to pay for infrastructure projects, especially with respect to highways and bridges. But it [the federal fuel tax] has not changed in 25 years and it is worth half of what it used to be. Long term, we need to move to a VMT approach.”

Doug Holtz-Eakin, president of the American Action Forum policy group and one of the witnesses testifying at that hearing, vouched for the VMT approach to highway funding.

“I am a big supporter of that switch – in the end, the damage to roadways comes from weight, axles, and miles driven,” he said during the question and answer portion of the hearing.

“You can adjust for all three of those things with a VMT fee; thus, it is a more genuinely targeted user fee that creates the right incentives for driving, the type of vehicles selected for driving, as well as one that will adequately fund the building and maintaining of our roadways.” Holtz-Eakin added. “It is a big step in the right direction.”