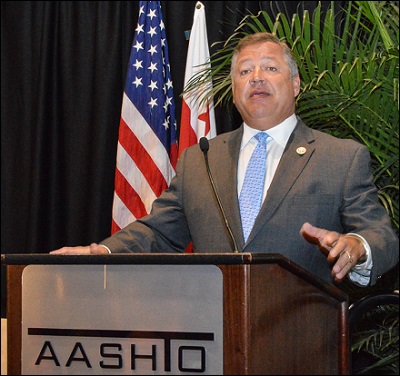 Outgoing Rep. Bill Shuster, R-Penn., released a 108-page “infrastructure proposal” on July 23 that he hopes can serve as a “discussion draft” that is intended to “further the national conversation about the current state of America’s infrastructure and highlight some of the major roadblocks to funding and improving our transportation network.”

In a three-page “vision statement” that accompanied the proposal, Shuster – chairman of the House Transportation and Infrastructure Committee – stressed that “infrastructure is the backbone of our economy, our national defense, and our identity. If we can’t move people and goods efficiently throughout the country and into the broader world, then our economy suffers.”

Yet he added that his proposal – crafted with input from “both sides of the aisle,” he stressed – does not attempt to solve every infrastructure issue, “nor does it pretend to provide all of the answers.”

Though Shuster noted that this “discussion draft” is not intended to be introduced as a bill, Bud Wright, executive director of the American Association of State Highway and Transportation Officials, told the AASHTO Journal that it provides a solid “framework” to guide the legislative process for the next highway reauthorization bill.

“We appreciate Chairman’s Shuster’s leadership in developing this framework and for soliciting input from members of Congress from both sides of the aisle, as well as from stakeholders within the transportation industry,” Wright added.

First, Shuster proposes to increase federal motor fuel taxes on gasoline and diesel by 15 and 20 cents, respectively, then index those taxes for inflation.

However, those fuel taxes would then be completely phased out after 10 years and replaced with a new funding mechanism recommended by a commission whose recommendation would receive an automatic vote in Congress – sharing similarities with two commissions developed under 2005’s Safe, Accountable, Flexible, Efficient Transportation Equity Act: A Legacy for Users or SAFETEA-LU, first on policy and revenue and second on finance, and the Base Realignment and Closure or BRAC Commission on binding legislative mechanism.

Second, to further address near-term revenue shortfalls in the Highway Trust Fund, Shuster’s proposal would create “new levies” on electric vehicles and bicycles – a 10 percent fee on the wholesale price of electric vehicle batteries and a 10 percent user fee on the wholesale price of adult bicycle tires – as well as reinstate the 4.3 cent per gallon fuel tax on diesel fuel (indexed to inflation) used by passenger trains eligible for funding under certain federal public transportation programs.

Third, Shuster’s discussion draft seeks to extend the Fixing America’s Surface Transportation or FAST Act of 2015 by one year, which would repeal the $7.6 billion rescission of unobligated highway contract authority scheduled for July 2020.

Fifth, Shuster’s proposal seeks to continue improvements in project delivery by speeding up the environmental review and permitting process – enshrining the “One Federal Decision” executive order from the Trump Administration, while expanding categorical exclusion under the National Environmental Policy Act or NEPA to apply to all transportation projects, beyond just highway and multimodal projects.

Finally, AASHTO’s analysis noted that Shuster’s proposal aims to increase the number of financing tools available for transportation infrastructure projects by setting up a public-private partnership framework and a revolving fund for federally-owned assets; allowing some of the TIGER/BUILD monies to be used as “bonus payment” in asset recycling deals, while putting the Build America Bureau at USDOT in charge of both federal financing support and overseeing project delivery.