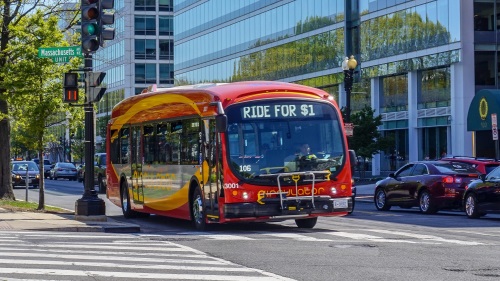 “Americans understand that investment in public transportation is an essential element to help their communities grow,” said APTA President and CEO Paul Skoutelas in a statement. “Public transit garners this overwhelming support because it is an important link to connect employees to jobs, customers to businesses, and to the things that improve peoples’ quality of life.”

The APTA’s survey, released on July 23, is based on 1,201 telephone interviews conducted across the United States between February and March this year, with 1.2 percent of those calls conducted in Spanish, the group noted.

The poll also found that 80 percent of the respondents said public transportation is “important to communities” because “it helps businesses flourish, by bringing both workers and customers to businesses.” In addition, 80 percent of those surveyed said public transit is “valuable to communities because it provides people with vital connections to fundamental resources such as jobs, schools, and medical facilities.”

APTA added that 75 percent of those polled said public transportation remains “an important option” for daily commuters concerned with issues of costs and traffic – support that continues even as Americans gain more mobility options, such as via car sharing services.

That broad public support is one reason why some state departments of transportation believe demand for public transit is only going to keep increasing.

“As the population continues to grow, cities will need to add more modes of transportation to support its residents, commuters, and visitors,” explained Jeffrey Bennett, the newly promoted associate director of the transit delivery division at the District Department of Transportation.

“Multi-modal transportation systems, like the one we have in the District, help mitigate traffic congestion and accommodate growth in our city and many others like it across the country,” he noted in response to questions emailed by the AASHTO Journal. “I also expect new and emerging transportation models will connect to current transit systems, continuing the need for mass transit systems like buses and streetcars in the transportation ecosystem.”

DDOT’s transit delivery division operates the Circulator Bus System and H Street/Benning Road Streetcar system in the District of Columbia and Bennett – a 12-year veteran of the transportation industry who previously served as assistant vice president of operations for the Denton County, Texas Transportation Authority – added that “affordability” and “frequency” would be key components of transit system design moving forward.

“One of the things that sets Circulator apart from other systems is the frequency of the buses [as they] arrive at their stops every 10 minutes, compared to the 15 to 20 minute frequency that most bus systems provide,” he said. “But by far, the biggest benefit of the Circulator is the affordability and accessibility in a densely populated city like Washington, D.C. With rides only being a dollar, riders can visit almost every part of the city for only a few dollars. An added benefit is that we are working to reduce our carbon footprint by including 100 percent electric buses to the fleet.”