Use of Tolled Ohio River Bridges Linking Kentucky, Indiana on the Rise 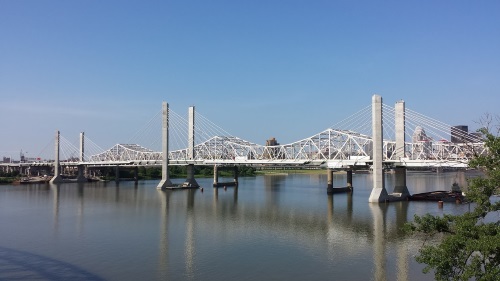 Crossings on the three tolled bridges connecting Louisville, Kentucky, and Southern Indiana reached new highs in the second quarter, according to data tracked by the RiverLink toll collection agency.

“Adjusting to a new tolling system takes time,” said Scott Adams, Indiana Department of Transportation director of tolling for the Ohio River bridges, in a statement. “Many drivers in our area have been introduced to all-electronic tolling for the first time [but] only 18 months into tolling, we’re seeing more drivers enjoying safer and faster commutes on the bridges and people needing assistance are connecting to customer service faster than ever before.”

“We’re continuing to see more drivers open prepaid accounts and get transponders, and that’s saving them money,” added Megan McLain, innovative finance manager with the Kentucky Transportation Cabinet, in a statement. “We started online account conversion early this year, and thousands of qualifying drivers have taken advantage of the offer. Those drivers have saved significant amounts of money with tolls lowered to transponder rates and late fees waived, and they’re continuing to save every time they cross a tolled bridge.”

She noted that the one-time conversion offer is only available before an account reaches “collection status,” which is at the fourth toll notice. More than 5,600 drivers have taken advantage of online conversion since late February, McLain said, with drivers saving an average of more than $100 each, with savings to date totaling nearly $600,000 (which includes tolls reduced and late fees waived).

In the first two quarters of the year, roughly $51 million in toll revenue from the three bridges was collected and split evenly between Indiana and Kentucky, with nearly $4 million in additional monies to be received from E-ZPass systems in other states from drivers who crossed the one of the three tolled Ohio River bridges with E-ZPass transponders from other states.

RiverLink noted that its billing cycle “is still active” and additional money is being collected from vehicle owners who have received invoices. Since the start of tolling on Dec. 30, 2016, more than $131 million has been collected and split evenly between the two states.