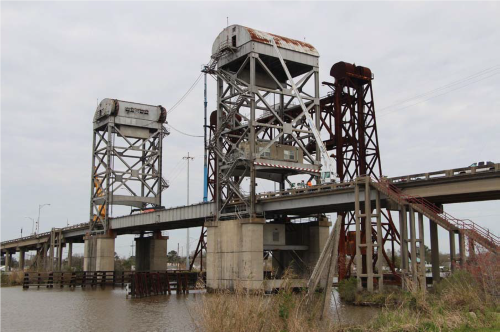 The Louisiana Department of Transportation and Development officially received a $45 million award from the Infrastructure for Rebuilding America or INFRA discretionary grant program on Aug. 8 to help fund the LA 23 Belle Chasse Bridge and Tunnel Replacement project.

“This important project will enhance safety, decrease travel times and improve the quality of life for the people in this area,” noted USDOT Secretary Elaine Chao in a statement.

The Belle Chasse Bridge and Tunnel project replaces a 60-plus-year-old reinforced-concrete tunnel and its adjacent structural steel vertical-lift-span bridge that cross the Gulf Intracoastal Waterway. The replacement bridge will be a single mid-level fixed-span four-lane facility built to current standards, Louisiana DOTD said, with the new bridge will also include a separate protected pedestrian/bicycle lane.

Chao noted during a press conference on Aug. 8 in New Orleans announcing the grant that the tunnel is “leaking and crumbling,” while the vertical lift drawbridge opens an average of 10 times a day for seven minutes at a time, creating backups on Highway 23 – a roadway that carries more than 33,000 vehicles a day.

“When there is a malfunction, which is not uncommon with machinery more than five decades old, the delays are a lot longer,” she said in her prepared remarks. “The old bridge and tunnel will be replaced by a fixed bridge which will allow both ships and cars to travel without interruption. Without the moving parts of a draw bridge, it will require less maintenance and fewer personnel. It will also provide, for the first time, a safe dedicated path across the waterway for bicycles and pedestrians.”

Chao added that other federal funding is involved in this particular project, with $26.2 million coming from the national Highway Performance Program and $12 million from the Surface Transportation Program funding.

That puts the total Federal contribution to the LA 23 Belle Chasse Bridge and Tunnel at $83.2 million, she noted.

“What is also significant is that these federal investments are accompanied by private sector participation,” Chao stressed. “The project will be a public-private partnership – the first of its kind in Louisiana. It will provide an additional $39 million.”