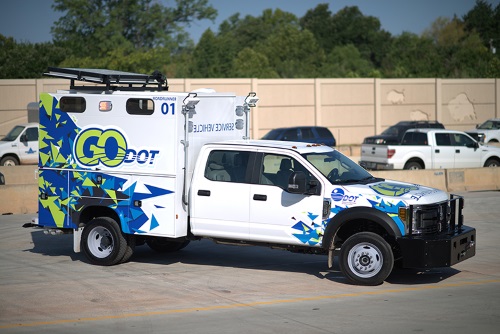 The pilot program, dubbed “GO-DOT,” will dedicate those two trucks to the I-235 construction zone between I-44 and North 36th Street in Oklahoma City. At a cost of more than $400,000 per vehicle, each truck features a wheel lift capable of lifting 3,500 pounds and towing up to 7,800-pound vehicles such as recreational vehicles and travel trailers as well as a wheel dolly to allow the removal of four-wheel-drive vehicles without damaging drivetrain components.

Oklahoma DOT also noted the crew cabs can seat up to four additional passengers to help quickly move motorists to a safer location.

The GO-DOT trucks will also be equipped to provide basic car maintenance such as jumping a dead battery, fixing a flat tire or providing a few gallons of fuel for those who ran out of gasoline inside the work zone. Once safely moved out of the construction area, motorists will need to call for additional help or a towing service.

The two rescue trucks – made possible by monies from the Federal Highway Administration as part of the nearly $88 million federally funded I-235 construction contract – will initially be operated by Allen Contracting Inc., the prime contractor for the I-235 construction project.

The contractor will provide operators for the service until the current I-235 project completes by early 2019, which is when the Oklahoma DOT will take possession of the two vehicles and hire its own operators.

“One of the most dangerous situations on an interstate is when a crash or other problem causes traffic to suddenly slow or stop,” noted Mike Patterson, executive director of the Oklahoma DOT, in a statement. “Our agency’s number one priority is the safety of the traveling public and we’re excited to bring this concept to Oklahoma highways. While initially launching in the Oklahoma City metro area, the goal is to build this program to help keep other targeted heavily traveled highways clear.”

“The biggest problem with stranded vehicles or crashes is the secondary accidents that often occur as motorists are distracted by what’s happening in the lane next to them or on the highway shoulder,” added Oklahoma DOT Chief Engineer Casey Shell. “These secondary accidents often are even more dangerous than the initial cause of the slow down. By keeping the lanes and shoulders clear and limiting distractions, we hope this service will reduce crashes and congestion in the work zone.”