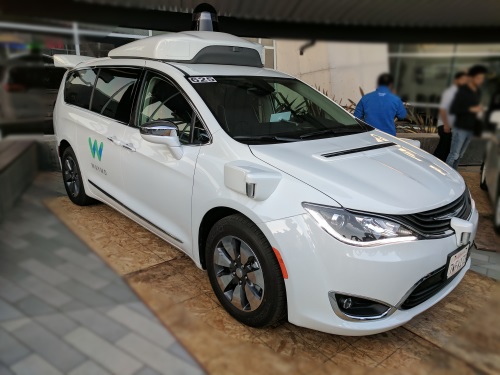 As the population of active autonomous vehicles is expected to rise sharply over the next eight years – a recent white paper by Juniper predicts that by the end of 2026, there will be more than 10 million autonomous vehicles on U.S. roads, with more than 50 million on the road worldwide – some infrastructure experts believe they could help solve roadway capacity issues, especially where bicycle and pedestrian traffic are concerned, while others are more circumspect about those possibilities.

“Autonomous vehicles are coming and they are coming fast,” D.J. Gribbin, senior operating partner at Stonepeak Infrastructure Partners and the former infrastructure policy adviser to president Trump, explained to the AASHTO Journal during a phone interview in July.

“But the most exciting thing from your audience’s end point is that, all of a sudden, you have a lot of infrastructure that is freed up. For example, you don’t need on-street parking,” he said. “That means you pick up one or two lanes you didn’t have before. And this is a huge boon to pedestrians and bicyclists because, now, you will be able to use current infrastructure more efficiently.”

But most important from an urban planning standpoint is that a “whole lot of parking spaces” won’t need to be created. “That helps you get [electric] scooters and bicycles off the sidewalks and safely into the streets, so you are not dodging them as pedestrians,” Gribbin said.

To that end, then, autonomous vehicles frees up space that “allows city planners to have safe, efficient, and sensible bike and pedestrian transportation.”

“Some see the potential for narrower lanes or shoulders, for example, due to more precise driving by CAVs,” noted Bill Panos, director of the Wyoming Department of Transportation and chair of the committee on transportation system operations for the American Association of State Highway and Transportation Officials noted during testimony before the U.S. Senate Environmental and Public Works Committee on June 13.

“Also, there is the potential for improved throughput [as] CAVs may need shorter separation between vehicles [and] may also be able to take better advantage of improved traffic light technology to improve vehicle throughput,” he explained. “More specifically, AASHTO is supporting a national traffic signal phasing and timing program that heavily leverages vehicle-to-vehicle and similar technologies to improve traffic flow and reduce crashes. AASHTO is also hoping to achieve the deployment of vehicle-to-infrastructure technology at roadway intersections in at least one corridor or network in each of the 50 states and Washington, D.C., by January 2020.”

Yet he stressed that infrastructure owners and operators want more information from automakers about what infrastructure elements they need in order to be successful where CAVs are concerned as they represent a “new paradigm” in the relationship between those two segments of the transportation community.

“We recognize that automakers work in a very competitive environment and may be challenged to reach consensus on their needs,” Panos explained. “Similarly, road agencies range in size and capability and don’t often speak with a uniform voice. However, if we are to provide infrastructure that supports these new technologies, both physical and digital infrastructure, clearer guidance from the automaker industry would be helpful.”

Still, Shailen Bhatt, president and CEO of ITS America and the former executive director of the Colorado DOT, noted during his testimony before the same committee on June 13 that CAVs could also help improve infrastructure by reporting deficiencies.

“In the future [we may] be able to create a common mechanism for automated vehicles to report an infrastructure item which needs a repair,” he explained.

Bhatt pointed to the Utah Department of Transportation’s Roadway Imaging and Inventory program as one example of that perspective put into action; a program that calls for the collection of 14,000 miles of “geo-located road geometry,” pavement distress, surfaces, imagery, lane-mile, bridge clearance, sign data and other “right-of-way” assets.

“Utah has also made inventory data available across all divisions within the department through its UPLAN website, which includes data describing the roadway asset purpose and function, as well as other metadata,” he added. “Such infrastructure asset management strategies may support automated vehicle deployment in a supplemental way.”

That means “planned” construction and temporary or permanent changes to roadways, such as intersection geometry, traffic pattern changes for rush hour and other time-dependent right of way operations can be tracked and information disseminated, Bhatt noted.

“Such modifications include events such as changes to traffic light positions, the introduction of new traffic light types, and changes to road geometry or lane lines such as when new pavement islands are created or double yellow lines are moved that modify traffic flow,” he emphasized.

“Databases also can contain information and location about the signs and signals which do not conform to national standards, as well maps of where local traffic codes may change from jurisdiction-to-jurisdiction,” Bhatt added. “This has presented an opportunity for road infrastructure operators to manage traffic and improve safety in ways that were previously unknown.”