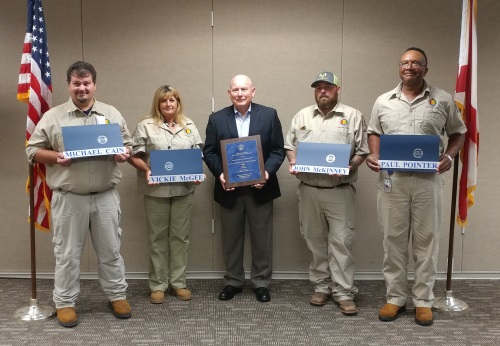 Four employees from the Alabama Department of Transportation’s North Region were recently recognized for their “quick and selfless” response during a fiery tractor-trailer crash July 26 on Interstate 65 in Limestone County.

Those four individuals – John McKinney, Michael Cain, Vickie McGee and Paul Pointer – rescued a truck driver after his tractor-trailer crashed into the median guardrail near the welcome center at Ardmore and then burst into flames.

McKinney and Cain used a fire extinguisher to break the passenger side window and pull the trapped driver from the cab as flames engulfed his vehicle, while McGee and Pointer assisted with traffic control until law enforcement arrived on scene.

“It burned so quickly, and these guys moved so fast to get him out of there,” noted McGee, the welcome center’s supervisor, in a statement. “Had they not, that guy would have burned up. I’m very proud of these guys.”

She also expressed gratitude toward several unidentified passersby who stopped to assist during the incident.