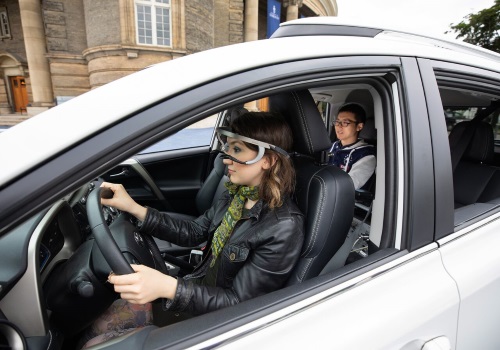 A recent naturalistic driving study conducted by the University of Toronto found that more than half failed to make vital “visual scans” for bicyclists and pedestrians when making right turns at intersections – a problem based on “attention failures,” blocked line-of-sight, and road infrastructure design.

The 19 drivers participating in the study ranged in age from 35 to 54, each with more than three years of driving experience. Out of those 19 drivers, 11 failed to gaze at an area of importance, where cyclists or pedestrians would be located, before turning, with all of those “attentional failures” related to not making frequent over-the-shoulder checks for cyclists. The researchers said there were more “visual check” failures turning onto Major Street, due to parked vehicles blocking drivers’ views of the bike lane.

“The results were quite surprising,” said Birsen Donmez (standing at right in photo above), an associate professor at the University and the school’s research chair in human factors and transportation, in a statement. “[When] drivers need to divide their attention in several directions, whether it’s other vehicles, pedestrians or road signs and traffic signals, traffic safety instantly becomes a major concern.”

She believes, based on this study, that changes to road infrastructure are needed to improve traffic safety, pointing to the inconsistent implementation of bike lanes as one of the many hazards facing Toronto streets.

“I think it’s an infrastructure issue. I don’t think it’s an education issue. When you look at the bike lanes in the city – they appear over here, but disappear there – the more unpredictable the road rules are, the more challenging it is,” Donmez noted, adding that until such infrastructure changes are made, “drivers need to be more cautious, making over-the-shoulder checks, and doing it more often.”

The takeaway for pedestrians and cyclists, she pointed out is that “drivers aren’t seeing you; not necessarily because they’re bad drivers, but that their attention is too divided. [So] when crossing a street, your assumption should be that the car doesn’t see you.”

Many state departments of transportation are focused on improving the integration of motor vehicle, bicycle, and pedestrian traffic into transportation infrastructure to combat some of those issues. That includes reversing a rising trend in bicycle fatalities, which increased from 621 in 2010 to 818 by 2015, according to the National Highway Traffic Safety Administration.

The Washington State DOT, for example, is working to identify critical and priority areas of vehicle/bicycle interaction such as main street highways, community core areas, transition zones, and intersections, and direct limited funding to them as part of its action plan initiated several years ago.

Barb Chamberlain, the director of WSDOT’s active transportation division, noted in an April blog post that, for traffic engineers especially, this means learning “new approaches” are needed for infrastructure design – particularly for those places where the state highway functions as the main street, a bike tourism route, or the only available connection between two segments of a growing trail network.

“Until just a couple of years ago, our highway design manual only allowed for bicycling on highway shoulders and conventional bike lanes, and we had never put green paint in a bike lane on state right-of-way,” she explained. “A lot of new solutions have emerged in the past few years: protected bike lanes, protected intersections, bike boxes, ‘floating’ transit stops that provide a buffer for bicycling connections and the sidewalk, leading pedestrian intervals in signal timing, and more.”

AASHTO is currently in the process of updating its 2012 Guide for the Development of Bicycle Facilities in part to address the need for new intersection “treatments” to reduce motor vehicle-bicycle collisions as well as detail optimal methods for constructing separated bike lanes.