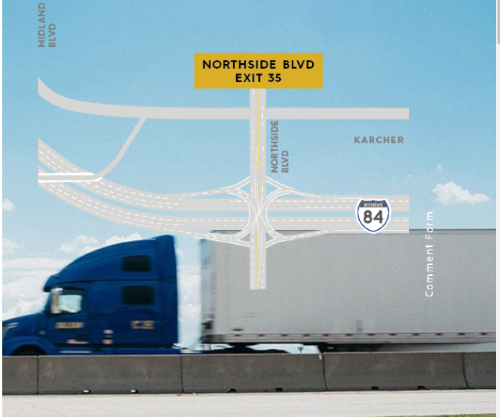 Secretary of Transportation Elaine Chao, and Deputy Federal Highway Administrator Brandye Hendrickson officially awarded a $90.2 million grant to the Idaho Transportation Department during an Aug. 29 ceremony to fund its I-84 Karcher Interchange to Franklin Boulevard project between Nampa and Caldwell, west of Boise.

The funding, originally provided through the USDOT’s Infrastructure for Rebuilding America or INFRA discretionary grant program on June 8, will help widen I-84 to three lanes in each direction from Franklin Boulevard to Karcher Interchange, add auxiliary lanes between Franklin Boulevard and Northside Boulevard ramps, replace the Northside Interchange, replace and widen the Karcher Road overpass, and replace and widen a canal structure at Mason Creek.

The project will also replace and expand two interstate bridges that cross over the Union Pacific Railroad and the East Lateral Canal; ultimately helping to efficiently move up to 126,000 vehicles per day by 2040, noted FHWA.

ITD noted that construction on the I-84 project will begin in October, with temporary lanes will be paved on the existing shoulders to ensure two lanes of travel in each direction will remain open during peak hours throughout construction, and is expected to be completed in 2020.

It is also part of the larger $820 million I-84 corridor project in Idaho’s Treasure Valley area that is expected to improve connectivity among the modes of freight transportation moving goods into and out of the Boise area and mitigate the impact on communities, the agency said.

“This project not only addresses safety, but also improves mobility and enhances economic opportunity,” noted Idaho Governor C. L. “Butch” Otter during the presentation. “Whether its potato chips or computer chips, this new addition to our transportation infrastructure will help get Idaho value-added products to market quicker and safer while helping to address the booming growth of the Treasure Valley. It is a vital expansion to a critical economic corridor that benefits Idaho, the region and the world.”

He noted that application to obtain this grant came about via a joint effort of the Community Planning Association of Southwest Idaho or COMPASS and ITD, with the City of Caldwell and Canyon County each contributing $125,000 in matching funds.

“The success of ITD’s bid was due in no small part to partnerships with other state and local agencies,” noted ITD Director Brian Ness. “Financial contributions from the City of Caldwell and Canyon County, and assistance from agencies such as COMPASS, the Idaho Department of Commerce, and our Congressional delegation supported the need to fund this critical corridor.”