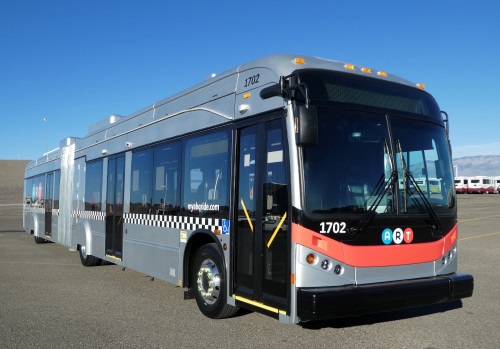 The Federal Transit Administration finalized a $75 million grant agreement with the City of Albuquerque Transit Department – known as ABQ Ride – for a new bus rapid transit or BRT line on Aug. 31.

“We support Albuquerque’s investment in BRT, which will enhance transit service for thousands of residents and visitors traveling downtown and along this busy corridor,” noted FTA Acting Administrator K. Jane Williams in a statement.

a 17.1-mile project with 8.8 miles of exclusive BRT lanes that aims to improve the “speed and reliability” of transit service along Historic Route 66, now called Central Avenue, which is one of the region’s key east-west corridors and one of the few roads crossing the Rio Grande River. ABQ Ride noted that existing bus service in this corridor accounts for about 40 percent of its daily ridership.

FTA said it will provide ABQ Ride with $75 million for the Albuquerque Rapid Transit project through FTA’s Capital Investment Grants or CIG program, with funds provided on a reimbursement basis.

The agency added that its CIG Program has so far funded 11 such grant agreements, including this one with ABQ Ride, since January 2017, totaling approximately $2 billion in funding commitments.