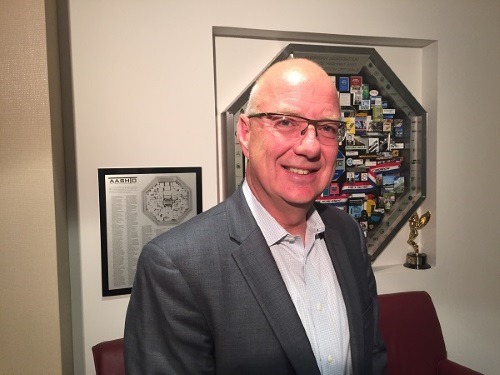 Kirk Steudle, Michigan’s transportation director for 12 years and a 31-year veteran of the Michigan Department of Transportation, announced he will be retiring effective Oct. 31, though he will continue as interim CEO and president for the American Center for Mobility – a position he took on in mid-August – until that group’s board of directors selects a permanent replacement.

“Needless to say, this is bittersweet,” said Steudle in a statement to MDOT employees. “My entire professional career has been spent at MDOT and the friendships forged will be lifelong. I could not be more honored to have worked alongside so many of you in the service of our great state. It has been especially rewarding because you share my commitment and belief in the intrinsic value of public service.”

“Kirk has been an outstanding department leader, making MDOT a model for other states to emulate, but also as a leader in advance vehicle technology that has helped make Michigan the mobility capital of the world,” noted Michigan Gov. Rick Snyder in a statement. “Kirk is known around the world as a mobility rockstar – and that’s something he and all of Michigan should be proud of.”

Gov. Snyder has not decided yet on either an interim or permanent appointment for the department director’s position.

MDOT notched many accomplishments over the course of Steudle’s tenure at the agency, including establishing the first public-private partnership for freeway lighting, the state’s first use of the “bridge slide” construction technique, and the launch of “MCity,” a facility dedicated to connected and autonomous vehicle or CAV research.

Steudle’s firm belief in “public service” also drove his participation in many transportation organizations during his more than three-decade career in the industry.

Steudle served as president of the American Association of State Highway and Transportation Officials from 2011 to 2012 and has been a member of AASHTO’s board since 2006.

He also served as the 2014 chair of the Transportation Research Board executive committee, which he’s served upon since 2004 and chaired the group’s Strategic Highway Research Program or “SHRP 2” oversight committee for TRB.

He’s been the chair of the Intelligent Transportation Society of America board of directors as well as serving as member of its program advisory committee to USDOT.

For that and his work in the field of CAVs, ITS America inducted Steudle into its Hall of Fame during the group’s annual meeting in June.

“What is unusual is that I don’t have an IT [information technology] background; my background is in construction and road building,” he explained to the AAASHTO Journal after receiving that hall of fame nod.

But Steudle said a visit to the General Motors providing grounds in Milford, Michigan, 13 years ago – to experience then-experimental vehicle systems such as blind spot detection, automatic emergency braking, and electronic stability control – “opened his eyes” to the vital role new technologies would play in improving transportation safety; technologies he set out to support and adopt where possible.

“Thirteen years ago it was considered ‘Buck Rogers’ stuff; now its standard equipment in most cases on most vehicles and it saves a lot of lives,” he explained. “Those test track experiences proved to me that technology was advancing really quickly and that we needed to be part of that advancement. This is an exciting time, a time when the convergence of automotive, cellular and computer technology is transforming transportation – transforming the ways people and goods move. It is exciting to be part of it.”

And in his statement to MDOT employees, Steudle is confident the “leadership role” played by the agency in the field of transportation will only continue.

“Looking to the future, I see many bright leaders emerging in the ranks,” he said. “I’m confident that MDOT will continue to be a model for others at the state and national level.”