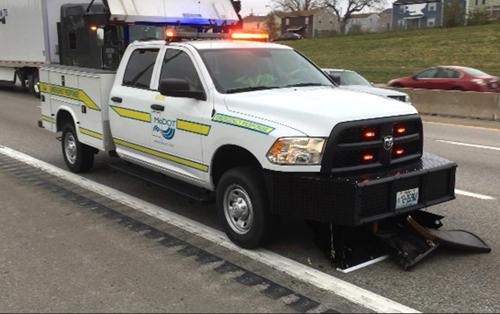 The death of Julie Love 14 years ago spurred employees at the Missouri Department of Transportation to design and build a truck-based machine that would move debris off highways and roads without workers having to exit the vehicle.

Called “JAWS,” which is shorthand for “Julie’s Automated Waste-Removal System,” it features an automated drop-down skid-plate mounted to the front of a truck to “scoop” debris off the roadway, moving it onto the shoulder where it no longer impedes traffic and can be picked up in a safer manner. The machine is dedicated to the memory of Love, a MoDOT employee killed in 2004 while attempting to remove debris from a local highway.

Invented by workers at MoDOT’s Kansas City District and KC Scout Traffic Incident team and built by the agency’s Fleet Team, JAWS is operated from inside the vehicle using hand controls and a mounted camera display. It not only provides a faster way to clear the roadway, it is more cost-effective, too, as fewer trucks and personnel are needed to conduct debris-removal operations, noted MoDOT Chief Engineer Ed Hassinger in a statement.

“Innovation is at the core of our culture and this piece of equipment is just one example,” Hassinger noted. “Our employees are challenged to take their ideas, put them into practice so we can continually get better. They found a safer and better way to get the job done.”

He said MoDOT plans to add at least 27 additional JAWS devices across the state and that the agency is in the process of having the additional units manufactured.