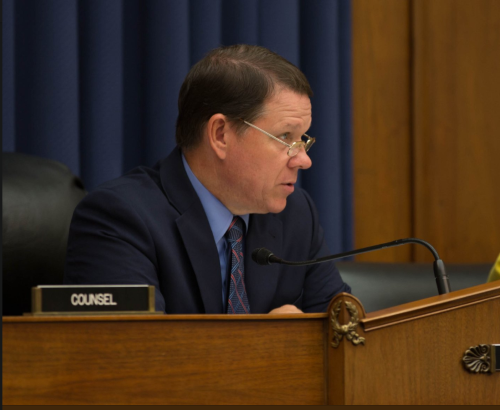 The House of Representatives’ Transportation & Infrastructure Subcommittee on Highways and Transit elicited insight concerning a wide array of emerging technologies during a Sept. 5 hearing that “have the potential to improve the safety and productivity” of the U.S. surface transportation system, according to  Rep. Sam Graves, R-Mo., the subcommittee’s chairman (seen above).

“The population and amount of freight moving through our nation are projected to increase significantly in the coming decades,” Graves said in his opening statement, with the background memo for the hearing noting that America’s population is projected to grow from 319 million in 2014 to approximately 400 million in 2051, with the movement of freight expected to increase by 40 percent over the next 30 years.

Graves added that U.S. trade volume is expected to double by 2021 – and double again by the year 2030 – while vehicle miles traveled is projected to increase by nearly 20 percent by 2035.

“Being innovative and utilizing transportation technologies where it makes sense to do so will help our surface transportation system move people and goods more safely and efficiently,” Graves explained. “[So] it is vital that we share our best practices and lessons learned.”

DriveOhio’s Barna noted in his written testimony that “one of the biggest things we are learning is the importance of using public/private partnerships to achieve our goals,” adding that his group’s public-sector partners include nine state agencies and municipalities from across Ohio that are in “working groups” with the automotive industry, academia, and research and development institutions.

Barna stressed during the question and answer portion of the hearing that while he is “not a big fan of federal government regulation,” because new innovations such as connected and autonomous vehicles or CAVs will need to operate across 50 states, “at some point we need to have a national conversation about interoperability and standardization, because this technology is going to impact transportation like nothing has before.”

HRTA’s Castillo, who spoke on behalf of the Community Transportation Association of America at the hearing, noted in her written testimony that keeping up with the pace of transportation’s “technological” revolution is becoming more difficult – especially for rural operations.
“As with many rural transit systems, we have a limited number of staff, and most wear many hats, covering a variety of tasks and skills. It is a challenge to plan for the future, when we are just trying to get through the daily tasks of ensuring safe, on-time, and reliable service,” she said. “However, I believe it is imperative for rural transit systems to plan, educate and invest in our future, or we will fall even further behind our urban counterparts. People who live in more rural areas need the same types of services as those in urban areas and even though it may be more challenging and sometimes more expensive, we need to find ways in which to efficiently meet those needs so their independence, freedom, quality of life and ability to grow and prosper where they live is not compromised. This is where innovation and technology come together to play a vital role.”

Castillo echoes Barna’s observation that “the federal government needs to be involved” from a regulatory perspective with CAVs and other technologies. “If not, suburban and rural transportation may get left behind as CAVs focus more on urban operation,” she added during the question and answer portion of the hearing. “A lot of people in rural areas have the same transportation needs; there is definitely a place for autonomous vehicles in rural areas.”

Yet outgoing Rep. Bill Shuster, R-Penn., and chairman of the overall T&I committee, commented during the hearing that federal regulators are having just as hard a time keeping up with the pace of technological change as rural transit operators.

“We can’t keep up with the technology,” he said. “The minute we figure out it is OK, it [becomes] a whole new technology.”

But ITS America’s Bhatt emphasized in his testimony that the benefits offered by new technologies – from CAVs to traffic data analysis systems – outweigh those challenges.

“With new information and wireless technologies, there is a new interface – a digital interface between the car and driver and the road infrastructure,” he explained. “This has presented an opportunity for infrastructure operators to improve safety, manage traffic, and introduce new models and modes of transportation in ways that were previously unknown.”

Bhatt added that by applying “intelligent transportation technologies” to the nation’s existing transportation infrastructure, efficiency and safety can be maximized together.

“We are entering a technology revolution that will define the way people, goods, services, and information move in the 21st century,” he added. “It is a whirlwind of innovation that will change entire industries as well as transform communities large and small as well as urban and rural. It is a new transportation era as dramatic as the period when the car supplanted the horse and buggy. This transformation can positively affect both the safety and operations of our transportation system … making it more sustainable, accessible, and equitable.”