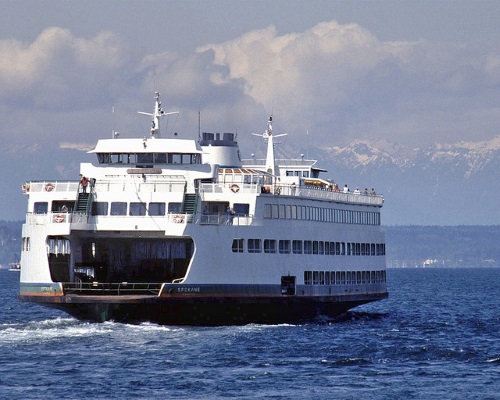 As part of an effort to meet 2020 greenhouse gas (GHG) emission targets set by the state legislation, the Washington State Department of Transportation began a “transition effort” on Sept. 4 to convert its three Jumbo Mark II ferry vessels from diesel to hybrid-electric power; a move based in part on a study conducted by the Elliott Bay Design Group earlier this year that found those three vessels burn approximately 4.2 million gallons of fuel per year and generate more than 26 percent of the ferry fleet’s annual GHG emissions. Overall, the study also found that the ferry fleet as a whole produces 67 percent of WSDOT’s annual GHG emissions.

The three vessels in question – the Tacoma, the Wenatchee, and the Puyallup – are the largest in the Washington State ferry fleet and the biggest emitter of GHG emissions, noted Will Ayers, EBDG’s chief electrical engineer, in a statement.

“Hybridization of the Jumbo Mark IIs has the potential to accomplish Washington State Ferries’ role of providing safe, affordable, and environmentally friendly transportation across the waters of Puget Sound in a revolutionary new way,” he added.

EBDG’s study was included in a transportation measure signed by Washington Governor Jay Inslee in May that news reports said contained funding of $600,000 to develop a request for proposal to convert those three Jumbo Mark II Class vessels to hybrid electric propulsion.

The firm’s study examined the initial power and energy requirements for each ferry route – Seattle to Bainbridge and Edmonds to Kingston – along with the sizing of the battery banks and impacts to the existing propulsion system on the vessels as well as a life cycle cost analysis.

The study results also indicated converting those three Jumbo Mark II vessels to hybrid-electric power would be “feasible and financially justifiable,” with benefits also including zero-emission crossings on the proposed routes, major reductions in oxides of nitrogen and particulate emissions, plus the near-elimination of diesel fuel consumption.