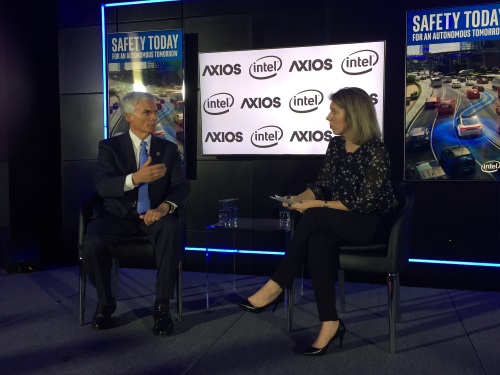 Latta (seen above at right) noted that his focus right now is on getting Senate support for the SELF DRIVE Act, which the House’s Energy and Commerce Committee passed unanimously in September last year.

“My fear is that if we don’t get legislation passed, we will fall behind the rest of the world in autonomous vehicle development and that the states would have to go do their own thing” in terms of regulating CAVs.

“We have to convince folks in the Senate to pass this,” Latta said. “This will help us make sure we have uniform national standards in place instead of a regulatory ‘patchwork.’”

SAE’s Schutt noted during his remarks “that there is no real gauge” as to where CAV technology “can or should be” at this moment because it is still “rapidly evolving.”

“We are still in the first inning of a very exciting baseball game where these vehicles are concerned,” he explained. “Right now there are multiple paths forward for this technology but no single solution as of yet.”

For that reason, the “patchwork” of regulations governing CAVs from state to state right now is “a good thing in the sense that it allows for multiple approaches to learn what works well and what doesn’t.”

But in the long run more “uniform” standards will need to be worked out especially in terms of governing how CAVs interact with each other, vehicles that are still human-controlled, and roadway infrastructure.

Global Automakers’ Bozzella added that “what we are seeing” with CAV development right now “is a convergence of business models and investment around mobility” that aims to improve highway safety while boosting vehicle efficiency, especially in terms of reducing fuel consumption.

And where safety and CAVs are concerned, “redundancy is centrally important,” he stressed. “It is about using cameras, radar, and V2V [vehicle-to-vehicle] technology all in a single web to create a constant and redundant system.”

Latta emphasized that same point, saying that “safety must be first, last, and always” regarding the public deployment of CAVs, while noting that cybersecurity needs to be built into them with “redundancy on top of redundancy while protecting privacy” as well.