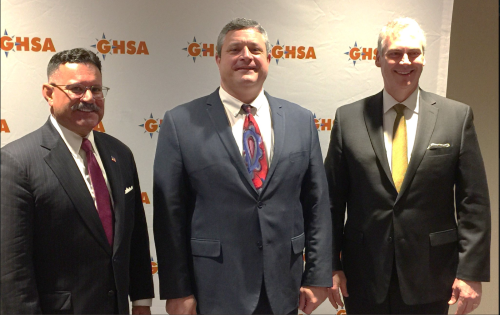 The Governors Highway Safety Association elected Darrin Grondel, director of the Washington Traffic Safety Commission, to serve a one-year term as the organization’s chair during the group’s annual meeting in Atlanta in late August.

[Grondel can be seen above, standing in the middle between FMCSA’s Ray Martinez on the left and the Insurance Institute for Highway Safety’s David Harkey on the right.]

As head of GHSA – a national nonprofit association of state and territorial agencies that address behavioral traffic safety issues – Grondel plans to focus in particular on substance-impaired driving, preparing for autonomous vehicle technologies, and ensuring the safety of all road users.

“Impairment is impairment, regardless of the substance,” he said in a statement. “Combating this growing problem means having the research, funding and tools to effectively educate the public and equip and energize law enforcement.”

Grondel, who has headed up the WTSC for six years following a 25-year career with the Washington State Patrol, previously served multiple terms on GSHA’s board and as the group’s secretary for three years.

GHSA noted that its updated policy and priority statement reflects the “latest science” and expert consensus to address drugged driving, including zero tolerance laws for illicit drugs, use of electronic warrants, and marijuana open container laws. GHSA said its revamped policy statement also recognizes that the best available research has not identified a “scientifically sound illegal per se limit for marijuana.”

Also included in the group’s updated new policies and priorities document is “a renewed encouragement for research, testing, and the deployment of connected, autonomous, and advanced driver assistance technologies,” while also voicing “additional support” for “infrastructure-based countermeasures to promote the safety of bicyclists, pedestrians, and all other road users.”