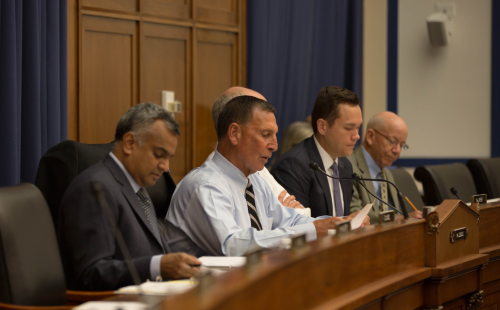 The House of Representatives Subcommittee on Aviation delved into the issue of integrating unmanned aerial vehicles – known as UAVs or drones – as well as flying cars into the national airspace system or NAS, especially in terms of smoothing out “interoperability” issues within the existing system.

“We are in the early days of a technological revolution that will transform the aviation industry and our national airspace,” noted Rep. Frank LoBiondo, R-New Jersey, chairman of the subcommittee within the House’s Transportation & Infrastructure Committee.

“In recent years, we have witnessed the growing use of unmanned aircraft, or drones, to improve many different sectors of our economy, including infrastructure, energy, emergency response, and agriculture,” LoBiondo (pictured above in white shirt and tie) said in his opening statement.

“More recently, we have heard from developers of new ‘flying car’ aircraft [which] may soon fly commuters and across-town travelers above congested highways, bridges, and roads in our cities,” he added. “These aircraft will carry three or four people short distances, fly a couple of thousand feet up, and share similar flight technology to drones.”

Yet he noted that UAVs and flying cars will operate at altitudes much closer to the ground and largely from places other than airports, thus “raising at least a couple of initial questions” of how to safely integrate them into the existing airspace system.

“First, how will these aircraft physically fit and operate within the three-dimensional airspace and be kept at safe distances from other aircraft, buildings, and people on the ground in urban and other environments?” LoBiondo said.

“The second big question relates to air traffic control systems [as they currently] rely on a number of procedures, including extensive voice communications between pilots and controllers over the radio. Flying cars and UAVs will be far different [with the] highly automated systems on these aircraft communicating … with less human intervention. So the question here is, how will the new aircraft and systems interoperate with existing ones and also with each other?”

FAA’s Yak noted in her written testimony that the FAA to date has processed over 1.1 million UAV registrations, of which more than 230,000 are for unmanned aircraft that can be flown commercially. “For perspective, as of July 2018, there are just under 300,000 manned aircraft listed on the U.S. registry,” she said. “The need for us to fully integrate this technology into the NAS continues to be a national priority.”

Yak added that the USDOT’s drone integration pilot program, officially launched on May 9, “sets the stage to move even closer to expanded operations through enhanced partnerships among industry and state, local and tribal authorities,” especially as it is focused on “collecting data to support the development of regulatory actions necessary to allow more complex, routine low-altitude operations.”

When it comes to “flying cars,” Uber’s Prevot noted in his written testimony that, “just as skyscrapers allowed cities to use limited land more efficiently, urban air transportation will use three-dimensional airspace to alleviate transportation congestion on the ground.”

However, based on Uber’s research to date, “we have found that one of the primary challenges in enabling urban air transportation is airspace integration and air traffic management,” according to Prevot. “In order to operate at affordable prices and serve all our potential customers well, we intend to fly thousands of aircraft in each metropolitan area that we serve. The traditional safe, human-centered air traffic system, however, is not designed to manage air traffic at this scale.”

Thus he said Uber and others involved in getting the “flying car” industry off the ground envision operating their aircraft along “precise virtual route networks” that can be dynamically adjusted to the needs of air traffic safety and control, noise, and other “community considerations” as well as air traffic demand.

Those networks “will provide high predictability and transparency of our operations,” Prevot said, especially when combined with the Low Altitude Authorization and Notification Capability or LAANC initiative the FAA rolled out April 30.

“LAANC is an automated application and approval process for airspace authorizations that uses airspace data, including UAV facility maps, to dramatically decrease response times on flight requests from weeks or months to near real-time,” he explained.

“We believe the initiative sets the groundwork for the future of drone traffic management and are supportive of its ongoing expansion to 300 air traffic facilities and 500 airports across the country,” Prevot said. “We are investing in urban air transportation because it has the potential to deliver time savings at affordable prices to consumers across the world. We see exceptional demand across all large markets for safe, reliable, fast transportation services, and our network can be an excellent supplement to public and private transit options.”