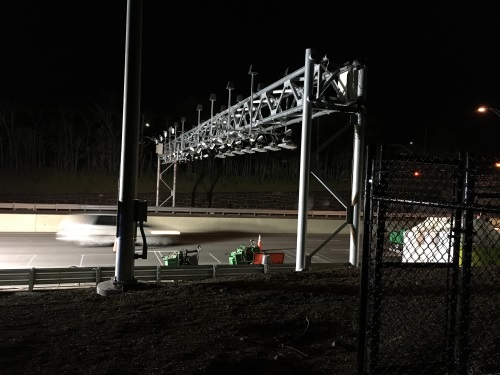 The Rhode Island Department of Transportation released a second set of data from the state’s tractor-trailer/truck-only tolling program on Sept. 13 that shows a higher than expected volume of commercial truck traffic is being tolled.

The agency said its latest data covers from July 11 through August 10 and tallies the number of transactions and tolls assessed from gantry locations 1 and 2 (devices similar to the Massachusetts Turnpike units seen in the photo above)  located on I-95 south of Warwick, adding that Gantry 1’s $3.25 per commercial vehicle toll supports construction for the Wood River Valley Bridge over Mechanic Street, while Gantry 2’s $3.50 toll supports construction for the Baker Pines Bridge spanning Route 3 and the Tefft Hill Trail Bridge crossing over the Tefft Hill Trail.

RIDOT originally estimated that 7,300 vehicles “qualified to be tolled” would pass through the first two gantries on weekdays, with approximately 2,200 being tolled on weekends – totaling roughly 177,000 vehicles per month. In actuality, 200,746 vehicles were tolled during the second full month of operation for the program, the agency said; generating more than $664,617 in toll revenue or $65,950 more than predicted.

Compared to the first month of the program, a low number of tractor-trailers are diverting from I-95 to Route 3 to avoid the toll; just  four per day are diverting, compared to pre-toll estimates that went as high as 300 per day.

[Side note: the agency is currently being sued over the “constitutionality” of its tractor-trailer-only toll program by the American Trucking Associations and three motor carriers – and the Rhode Island Attorney General’s office filed a motion for dismissal of that lawsuit on Aug. 27, according to news reports.]

RIDOT said that once the truck-tolling system is completed by the end of this year – with 12 tolling gantries in place along six major highway corridors, with each gantry location associated with a bridge or bridge group – it will generate $45 million per year to improve the state’s highway infrastructure.

This tolling effort is part of the state’s 10-year “RhodeWorks” plan; a $4.9 billion effort launched in to bring Rhode Island’s roads and bridges into a state of good repair by 2025, with only one-tenth of that amount expected to be generated by the tolling program, RIDOT noted.

The agency added that the cost of collecting the tolls and the operation and maintenance costs will total $4 million per year or 9 percent of the amount collected, with the remaining 91 percent deposited into restricted RIDOT accounts used to pay for the reconstruction and rehabilitation of specific bridge projects near the toll locations.