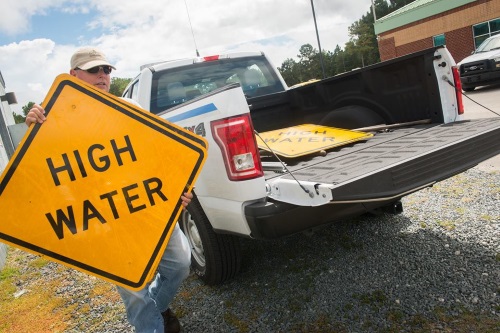 Though downgraded to a Category 2 storm before making landfall, the 100 mph-plus winds and heavy rains generated by Hurricane Florence were expected to affect five states along the U.S. east coast: North and South Carolina in particular, along with parts of Georgia, Virginia, and Maryland.

All five of them declared states of emergencies well before Florence came ashore, with their respective departments of transportation helping evacuate residents from coastal areas as well as deploying crews, equipment, and supplies in preparation for dealing with the hurricane’s aftermath; a storm that is expected to be “a very large one — far larger than we’ve seen in perhaps decades,” noted President Trump in a press conference held Sept. 11 with Brock Long, administrator of the Federal Emergency Management Agency, to address Florence’s potential impact.

FEMA’s Long noted that the biggest hazard his agency is initially worried about is storm surge, with Hurricane Florence generating water levels two to 13 feet above normal and 40-ft. waves, according to weather forecasters. “That’s the primary driver of the evacuations by North Carolina, South Carolina, and Virginia,” Long said.

The South Carolina DOT reversed 100 miles of I-26 and 20 miles of US 501 between Sept. 10 and 12 to evacuate its coastal areas ahead of Florence’s landfall and reported that traffic volumes along the I-26 corridor between Charleston and Columbia reached approximately twice the normal volumes in the westbound direction. South Carolina Gov. Henry McMaster noted in a news conference that more than 30,000 had been evacuated from his state’s coastal areas ahead of the storm.

The North Carolina DOT noted in a statement that its ferry division evacuated 2,181 people and transported 1,074 vehicles from Ocracoke on the Hatteras, Cedar Island and Swan Quarter routes between Sept. 10-12 before putting all of its vessels into a “safe harbor” until the hurricane dissipated.

Georgia’s Gov. Nathan Deal issued an emergency declaration for all 159 counties in his state Sept. 12, noting both coastal and inland regions needed to be prepared for heavy storm activity.

“In light of the storm’s forecasted southward track after making landfall, I encourage Georgians to be prepared for the inland effects of the storm as well as the ensuing storm surge in coastal areas,” said Gov. Deal in his statement, noting that Georgia will be “coordinating with federal, state and local officials to provide public shelter and accommodate those evacuating from other states.”

After Florence makes landfall, it is forecast to stall out, lose its strength and its steering currents, and then drop “copious” amounts of rainfall, FEMA warned, which is expected to cause major inland flooding, especially in the Carolina region.

“Flooding and the storm surge – those are the two main things that kill people, and this storm is not letting up,” noted North Carolina Gov. Roy Cooper in a Sept. 13 news conference.

As of Sept. 14, almost 400,000 North Carolinians were without power due to the hurricane – a number expected to increase as Florence moves inland – and the latest assessment expects the storm to cause $5 billion worth of damage along the eastern seaboard, according to news reports.

According to the National Hurricane Center, Florence is expected to drop 20 to 30 inches of rain in the coastal North Carolina areas into far northeast South Carolina, with isolated totals up to 40 inches – potentially dumping the equivalent of 10 trillion gallons of water on both of those states. The rest of South Carolina and North Carolina into southwest Virginia in expected to get between 6 to 12 inches, the NHC said, with isolated totals up to 24 inches.

The runoff from these incredible rainfall totals will continue for days, the NHC added, entering the river ways of the Carolinas and causing flooding may swell those watersheds for weeks, if not months.

“In some areas, crews have staged equipment in different areas so it can be available once cleanup and recovery begins,” NCDOT noted. “Generators have been checked and readied, traffic services offices are staging message boards and loading emergency trailers with barricades, signs and drums, and staff have made arrangements to have contractors on standby ready to respond to any storm-related tasks such as cutting and removing downed trees from roads.”

Fifteen NCDOT drones and multiple teams of pilots are also being readied for post-event damage assessment, the agency said.

As part of its storm preparations, the Virginia Department of Transportation urged residents to avoid travel and “expect the unexpected,” in the words of VDOT Commissioner Stephen Brich.

“Remain vigilant as the storm approaches. Plan now to avoid travel once impacts begin,” he said in a statement. “Heavy rains and high winds may cause hazardous travel conditions, especially with the ground already saturated in many areas. Once the storm begins, motorists should be alert to flooded roadways, downed trees and loss of power across the commonwealth. By staying off roads, VDOT teams, emergency service providers and utility crews will be able to reach those in need as soon as possible.”