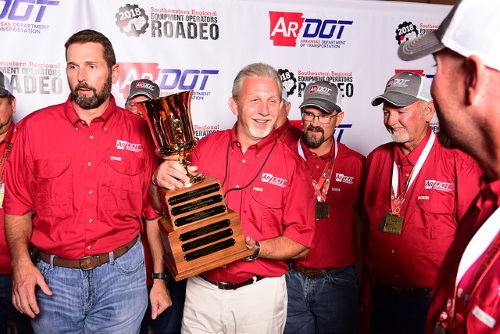 From Sept. 4 through 6 this year, teams from 11 state departments of transportation competed in the 16th annual Southeastern Regional Equipment Operators Roadeo in Rogers, Arkansas, where they pitted their knowledge of safety practices and equipment operating skills against one another in “friendly yet fierce” competition across six categories: tractor-lowboy trailer, tandem axle dump truck, single axle dump truck, mower, backhoe, and motor grader.

The team of operators fielded by the Arkansas Department of Transportation won the overall competition, taking home the first place trophy (seen above), with the team from the South Carolina DOT placing second and Tennessee DOT placing third.

Danny Straessle, ARDOT’s public information officer, told the AASHTO Journal that the “best of the best” compete in this event. He noted that ARDOT’s personnel must first survive district-level events and then a state-wide competition in order to get a chance to compete in the SREOR, which many of them treat as the “Super Bowl” for state DOT transportation equipment operators.

“This yearly event is about fostering safety awareness of employees working in or around work zones, strengthening team spirit and teamwork, and recognizing exceptionally skilled equipment operators in a friendly, competitive atmosphere,” he added. “We also invite the competitor’s families to the event so they can see just how important these jobs are.”