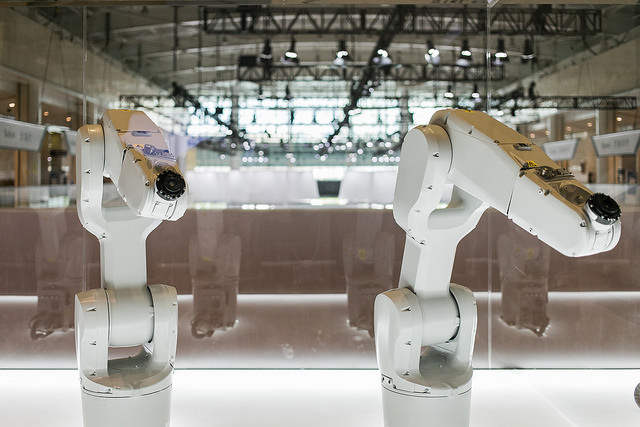 The world is going through a workplace revolution that will bring a seismic shift in the way humans work alongside machines, according to new research by the World Economic Forum, with more than half of all current workplace tasks projected to be performed by machines by 2025 as opposed to 29 percent today.

Yet in its new report, The Future of Jobs 2018, the “robotization” of the workplace is also expected to create more jobs than the ones it eliminates, with 133 million new jobs expected to be created by 2022 compared to 75 million that will be displaced for a net gain of 58 million positions, the group said.

Based on a survey of chief human resources officers and top strategy executives from companies across 12 industries and 20 developed and emerging economies – which collectively account for 70 percent of global gross domestic product – the WEF’s report finds that 54 percent of employees of large companies would need “significant re- and up-skilling” in order to “fully harness” the growth opportunities offered by this workplace shift to machines and algorithms.

At the same time, just more than half of the companies surveyed by the WEF said they only planned to “re-skill” those employees that are in key roles while only one third planned to re-skill at-risk workers. And while nearly 50 percent of all the companies polled by the group expect their full-time workforce to shrink by 2022 as a result of automation, almost 40 percent expect to extend their workforce generally and more than a quarter expect automation to create new roles in their enterprise.

The WEF noted that “technology proficiency,” such as technology design and programming, and distinctly human skills, such as creativity, critical thinking and persuasion, will be among the “competences” witnessing a “sharp increasing in importance” in terms of job creation.

The winners of a first-ever “transportation technology tournament” held this August in Minneapolis – an event co-sponsored by the National Operations Center of Excellence and the USDOT Intelligent Transportation System Joint Program Office – places that “work shift” predicted by the WEF into a transportation industry perspective.

For example, Britton Hammit from the University of Wyoming – one of five students on the tournament’s winning team – explained in an interview with the AASHTO Journal that though her father is a civil engineer and she literally “grew up in the transportation field,” her view of the industry is very different.

“Technology is my focus because everything in transportation is changing,” she explained. “It’s no longer so much about developing more physical [transportation] capacity; it is how do we make that existing space work better. While my core focus is on transportation, it’s one very different from the civil engineering focus of the past.”

The winning team’s solution, developed for the District Department of Transportation serving Washington D.C., allowed supervisors to feed real-time traffic data to DDOT, which in turn funneled that information to Waze and other consumer-grade navigation systems to provide motorists with more accurate travel-time data and the selection of alternative routes.

That data helps reduce congestion and delays, improving the “quality of life” for travelers – something Rachel James from the University of Texas, another member of the tournament’s winning team, said is what drew her away from her initial line of study as a business major to one focused on the transportation field almost by accident.

“I love the ability to make a difference in people’s lives and how we can use new technical resources to improve it,” James told the AASHTO Journal.

Those views align with the “augmentation strategy” suggested by the WEF, which would take into account the “broader spectrum of value-creating activities” that can be accomplished by humans, machines, and algorithms working in tandem. “Fulfilling this potential will require workers to have the appropriate skills for the workplace of the future, and will require business and policymakers to lead complementary and coordinated efforts to invest in human capital,” the group said in its report.