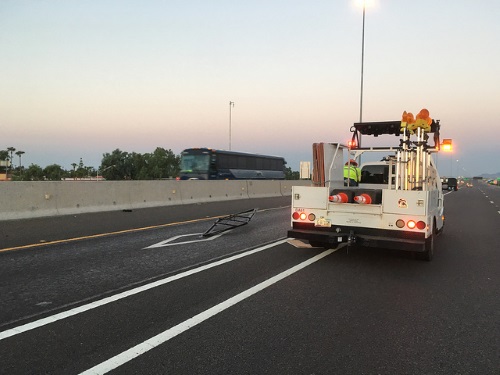 The Arizona Department of Transportation said it recouped $6.6 million for damage to the state highway system during its 2018 fiscal year, which ended June 30 – more than double what the agency recovered just four years ago.

ADOT added that the IRU – comprised of personnel with insurance industry backgrounds – reaches out to the “responsible parties” to road and/or bridge damage and their insurance carriers to recover repair costs, which include labor, equipment, and materials; with any money recovered going into the State Highway Fund.

He added that “process improvements” within the IRU are making it more efficient; improvements that include reorganizing operations to have separate teams tasked with researching responsible parties, plus sending requests and negotiating the final amounts recovered. Before that, each adjuster in the unit handled all aspects of a claim, said Jim Cupp, who leads the IRU.

“Now we have the best individuals in the right jobs,” he explained. “The efficiency of this model has allowed us to greatly increase recoveries with the same number of employees.”