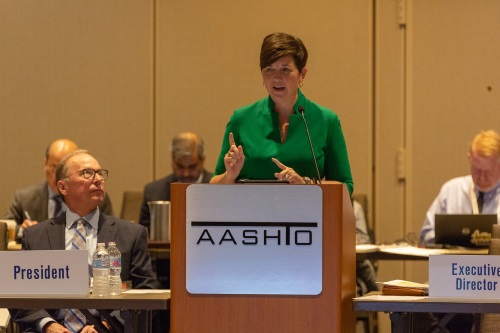 Deregulation will remain a central tenet of the USDOT and Federal Highway Administration going forward, explained Brandye Hendrickson (above), FHWA’s deputy administrator, during remarks at the American Association of State Highway and Transportation Officials annual meeting in Atlanta, GA, Sept. 24.

“We are in full implementation mode for the ‘one federal decision’ process and we are really looking forward to delivering more projects quickly and saving money through it,” she said. “And as we have more and more projects to meet the criteria, we are ready willing and able to get them into this framework.”

“This holds the most potential to transform the state/federal relationship,” Hendrickson added.

FHWA also plans to explore the possibility of delegating more of its responsibilities to state agencies – an effort it began Sept. 20 with a Federal Register notice that established a new “Special Experimental Project” dubbed SEP-16 to test and evaluate the delegation of program-level responsibilities of the Federal-aid highway program to the states, including the appropriate steps states should take to request to exercise delegated authority.

The FHWA said in its Federal Register notice that it “anticipates interest” in state assumption of program-level actions for approval of design standards, noise policies, preventative maintenance programs, and real property acquisitions and disposals.

Hendrickson also noted in her remarks that Congress provided “historic levels of funding” for highway infrastructure this year – some $1.98 billion above the levels set by the 2015 Fixing America’s Surface Transportation or FAST Act – and that “85 percent of those dollars have been provided now; they are out on the street and awarded.”

Finally, Hendrickson said that a “new strategic plan” is on the way from FHWA and that state departments of transportation should receive it starting “sometime in October.”

In her view, FHWA’s new plan “instills the philosophy that we will measure our success by the success of the folks that we serve; that we will understand their goals and priorities and incorporate them into our FHWA division-office plans.”