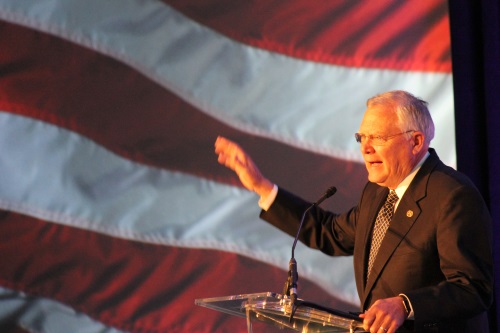 During a speech at the American Association of State Highway and Transportation Officials annual meeting in Atlanta Sept. 20-24, Georgia Governor Nathan Deal (above, photo by Georgia DOT) said his state is planning to invest in a second inland container port facility and build “truck-only” lanes on Interstate 16 out of the port of Savannah in a bid to relieve traffic congestion and improve highway safety.

“We have a good port in Savannah – the second busiest port along the entire Atlantic seaboard,” Gov. Deal said in his remarks. “That’s good but also bad because it creates traffic problems. I don’t mean to step on toes in the trucking business, but those trucks [hauling freight containers to and from the port] are always a concern to the driving public in smaller vehicles. So as the port grows, the number of trucks and containers grow as well.”

To help relieve that congestion on Interstate 75 caused by freight-hauling trucks, Gov. Deal said he helped cement a deal three years ago involving the Georgia Ports Authority, Murray County and CSX Transportation that led to the construction of an inland port in the northwest corner of Georgia called the Appalachian Regional Port, which services North Georgia, Alabama, Tennessee and parts of Kentucky.

Gov. Deal said that inland port – opened earlier this year and one of two in Georgia – “takes 50,000 containers a day off our roadways and will take double that number off our roads in 10 years. Soon, we will announce [construction of] a similar port in northeast Georgia off the I-85 corridor. We are excited about that; it will allow truckers to go to inland terminal and load containers on rail cars that will be transported to our port in Savannah. I think that is the wave of the future.”

He noted that such highway construction is made possible by a $1 billion transportation-focused tax increase Georgia’s legislature passed in 2015.

“When you are growing rapidly, that puts great pressure on your infrastructure – we were mindful of that. So in 2015 we convinced our legislature to revisit the way we pay for infrastructure improvements – because our funding mechanism had not been revisited in about 40 years,” Gov. Deal noted.

“Under our old formula, if you had the road paved in front of your house while you were in high school, you’d be eligible for social security before it was repaved again,” he explained. “So our consistent and unified effort to educate our legislature helped get a new transportation bill passed in 2015; giving us $1 billion in additional revenue for infrastructure renewal in Georgia. As a result, we’re in the process of getting 11 major projects started for the next decade.

FHWA: Highway Trust Fund Should be Solvent into 2022