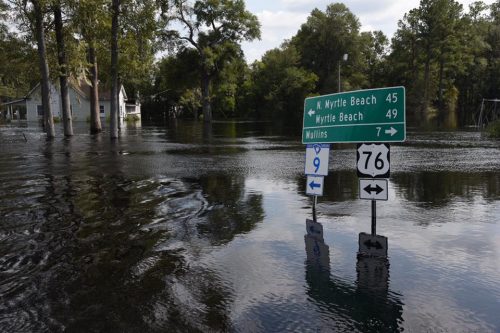 As emergency funds flowed from the Federal Highway Administration and from Community Development Block Grant – Disaster Recovery or CDBG-DR programs, North and South Carolina braced for more flooding in the wake of Hurricane Florence as rivers and lakes overflowed their banks due to the estimated 10 trillion gallons of rainwater dumped on the two states by the storm.

FHWA made $14 million in “quick release” emergency relief or ER funds available to North Carolina on Sept. 20 to help restore access to essential roads and bridges damaged by Hurricane Florence – an “initial installment” of funds used to restore essential traffic and limit further highway damage, which can help long-term repair and recovery efforts get underway more quickly, the agency said in a statement.

South Carolina received $8 million in ER funds from FHWA after USDOT Secretary Elaine Chao confirmed the approval for the release of those funds during a phone call with South Carolina Governor Henry McMaster earlier in the week.

“SCDOT will be able to put our contractors to work immediately with funds available to pay them as they complete the work. This is a great step forward in getting our highway system back to where it was before the storm and the flooding struck our state,” noted South Carolina Department of Transportation Secretary Christy Hall. “I’d like to thank Governor McMaster and our partners at FHWA for securing these funds for South Carolina.”

[SCDOT and the South Carolina National Guard have also been working side-by-side to build protective floodwater barriers for major roadways as well.]

House Appropriations Committee Chairman Rodney Frelinghuysen, R-NJ, noted on Sept. 22 that $1.68 billion in supplemental emergency funding via the Department of Housing and Urban Development’s CDBG-DR programs is included in the recently-reconciled FAA Reauthorization bill, which will support recovery efforts from “catastrophic wind and flooding damage” caused by Hurricane Florence, including resources to rebuild housing, infrastructure, and assist local businesses.

“Congress stands with our neighbors affected by this terrible storm, and we extend our deepest sympathies to those who have lost their homes, their livelihoods, and their loved ones,” Frelinghuysen said in a statement. “This legislation will provide a first round of assistance for the residents who must rebuild their homes, businesses, and lives in the wake of this disaster.

“The Appropriations Committee continues to monitor the damage caused by Hurricane Florence, particularly as the flood waters continue to rise,” he said. “While the Federal Emergency Management Agency has sufficient funds with which to respond to this disaster, we are prepared to take swift action to provide what more may be needed.”

He added that these block grants will not duplicate funds provided by FEMA, the Small Business Administration, or private insurance.

Even as those funds made their way to North and South Carolina, new post-storm flooding began, which affect several major highways.

North Carolina said it has reduced the number of road closures down to below 300 as of Sept. 26, from a peak of about 1,600 shortly after the storm.

North Carolina’s work on Hurricane Florence is shifting from emergency response to recovery, added Governor Roy Cooper on Sept. 24, but North Carolinians need to remain careful in areas hit hard by the storm.

“Florence is gone but the storm’s devastation is still with us,” he said. “As we’re shifting from emergency response to full-time recovery from the storm, please remain careful in hard-hit areas and please, please stay away from flooded roads.”

Thirty-five people have died as a result of the hurricane, the governor’s office noted, and across southeastern North Carolina, seven rivers were at major flood stage and three are at moderate flood stage.