‘Low Speed’ Operation May Be Key to Autonomous Adoption 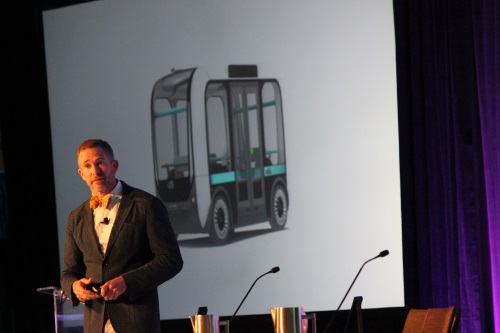 Focusing on the deployment of ‘low speed’ autonomous vehicles, especially in mass transit applications, may be the key to their acceptance by the general public, argued Jay Rogers (seen above, photo by Georgia DOT), CEO and co-founder of LM Industries – the parent company of Local Motors – during the keynote speech at the annual meeting of the American Association of State Highway and Transportation Officials in Atlanta.

Local Motors builds a three-dimensional or “3-D” printed self-driving shuttle bus called “Olli” that Rogers said provides “accessible mobility” that is neither truly a bus, truck, nor car. “It offers space like a living room to do many things; a vehicle that is both electric and autonomous that can take passengers and handle [freight] logistics. And it is not high speed, which is not necessary for where autonomous vehicles will go first.”

Rogers said that making “low speed” self-driving vehicles first will “change way people view autonomy [and] enable ways to change laws. By traveling under 20 mph, we can take the place of those one to 3-mile transit trips that comprise 80 percent of the 600 million daily vehicle trips in this country.”

To help encourage more communities to find “use cases” for Olli shuttle, Rogers said Local Motors developed an “autonomous fleet challenge” that would provide 10 “pods” of Olli vehicles – with each “pod” comprised of five to 10 units – to 10 major cities over the course of the next 10 months for free.

The first “pods” from this program, which launched Sept. 28, are headed to Phoenix, Arizona, and Sacramento, California, he noted, with initial “use cases” focused on providing transit at college campuses, hospital facilities, even for late-night transport back from amusement parks.

He said 3-D printing is dramatically changing how vehicles of all stripes can be built. “We can make a vehicle five times faster with 100 times less capital,” Rogers explained, noting that Local Motors can now “print” the vehicle chassis in roughly 10 hours, with the wheels and electric propulsion system added afterwards.

Ultimately, the goal of self-driving vehicles such as the Olli is to help boost human productivity – something Rogers said should be the “true measure” of a nation’s wealth.

“If you can make commuting hours less deadly but also more productive, you can change the face of the economy and the nation,” he said, via the wider adoption of autonomous vehicles. “About 95 percent of [vehicle] accidents are due to human error – drivers distracted by their phones. So we need a more dignified and productive way to get to work and to school.”