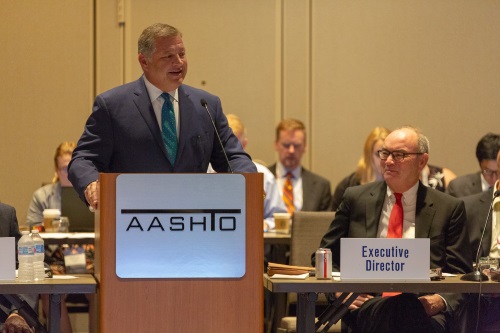 In what he described as probably the “last time I speak to this group” as chairman of the House of Representatives Transportation and Infrastructure Committee, retiring Rep. Bill Shuster, R-Penn., (seen above) noted in remarks Sept. 24 at the annual meeting of the American Association of State Highway and Transportation Officials that he believes a vehicle mile travelled or VMT fee is what will most likely replace the motor fuels tax in a decade as a way to generate funding for transportation infrastructure.

“The highway trust fund is in trouble – and estimates are by 2020 it will run out of money,” Shuster said. “With the growth we are seeing with hybrids and electric vehicles, we will not have the money we need in the future. So we have to figure out a way to raise funds without raising gas taxes … and I think this is a really good opportunity to go to a VMT. It may not be ready for prime time now so we should establish a national pilot program to test this user fee.”

Shuster added that he’s “talked to many people in trucking that have technology in place today to collect this [VMT] data” and that if they participate in a national pilot program “they should be allowed to stay on the system if they want to; if they are willing to do it and pay their fair share.”

He also felt that successfully moving to a VMT will be a “generational thing” as younger people are simply “more comfortable with such technology.”

Shuster also noted in his remarks that he still believes the U.S. Army Corps of Engineers needs to be relocated from the Department of Defense to the USDOT.

“I don’t believe it needs to be in DOD anymore,” he explained. “We have tried to move it out – and we were unsuccessful – but in my view it should become part of USDOT.”

Making ROWs a Source of Opportunity, Not Hassle