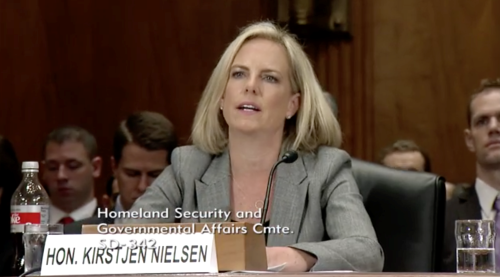 In a hearing on Capitol Hill held by the U.S. Senate Committee on Homeland Security and Governmental Affairs on Oct. 10, Kirstjen Nielsen, secretary of the Department of Homeland Security, hailed new unmanned aerial vehicle or UAV legal provisions within the FAA Reauthorization Act of 2018, which was signed into law by President Trump on Oct. 5

She noted in her written testimony that drug smugglers are using drones to monitor border patrol officers so they can slip into America undetected, while other criminals are using them to spy on sensitive U.S. facilities.

“The threat is real, and they can be used for a wide array of nefarious purposes,” Nielsen stressed. “Unfortunately, outdated laws have prevented us from setting up the sophisticated countermeasures we need to protect significant national events, federal facilities, and other potential targets from an airborne menace.”

But that has all changed with the FAA Reauthorization Act, she added. “It will give us the ability to better protect Americans against unmanned aerial threats,” Nielsen said. “We have already begun planning in earnest for how to best deploy these authorities and defensive technologies to defend the United States against this emerging danger.”

The safety of drone operation is also a concern, as tests conducted by the University of Dayton Research Institute in August showed that even small drones can significantly damage manned aircraft while in flight.

In a test designed to mimic a midair collision at 238 miles per hour, researchers from UDRI’s Impact Physics group launched a 2.1-pound DJI Phantom 2 quadcopter at the wing of a Mooney M20 aircraft. The drone did not shatter on impact, but tore open the leading edge of the wing as it bore into the structure, damaging its main spar.

“While the quadcopter broke apart, its energy and mass hung together to create significant damage to the wing,” said Kevin Poormon, UDRI’s group leader for impact physics, in a statement.

“We’ve performed bird-strike testing for 40 years, and we’ve seen the kind of damage birds can do,” he added. “Drones are similar in weight to some birds, and so we’ve watched with growing concern as reports of near collisions have increased. We want to help the aviation community and the drone industry understand the dangers that even recreational drones can pose to manned aircraft before a significant event occurs.”

Still, Bob Brock, director of aviation and UAS for the Kansas Department of Transportation, noted in a phone interview with the AASHTO Journal separate from the hearings that the benefits still outweigh the potential dangers where drone operations are concerned.

The Kansas DOT conducted the first “beyond line of sight” drone operation under the USDOT’s integration pilot program back in mid-August and Brock said his agency “is excited to help grow this industry because it is important to us to sheppard this piece of aviation in a positive direction. It will allow us to leverage the capability of the drones to inspect rail, highway and energy infrastructure – power lines, pipelines, wind energy turbines, all of those things – more safely than before.”

He said KDOT and its partners are now “learning better how to train people well with drone operator skill sets” as well as the important need to “protect safety and privacy” where drone operations are concerned going forward.

“We do not believe the drone itself is the silver bullet,” Brock noted. What they will do, though, is “open up entirely new era” in transportation. “We anticipate the ripple effect from drones will increase effectiveness and efficiency over time, making us better at what we do,” he said.