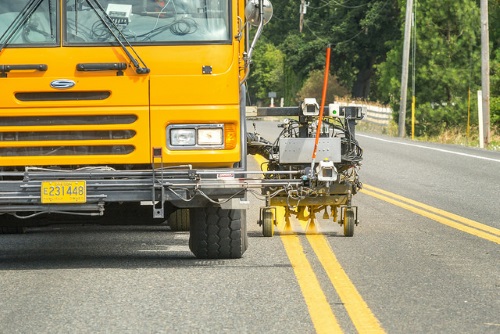 The Federal Highway Administration noted on Oct. 5 that it is preparing to pursue an update to the Manual on Uniform Traffic Control Devices for Streets and Highway or MUTCD to accommodate the needs of automated vehicles, while affording states and local communities “more opportunities” to be innovative with traffic control system designs.

[Above photo of roadway line striping courtesy of Oregon DOT.]

“The new manual will be forward-looking in accommodating technologies necessary to support highway connectivity, automation and innovations that improve safety and efficiency,” noted Deputy FHWA Administrator Brandye Hendrickson in a statement. “The revised edition will lay the groundwork for supporting the infrastructure of the future.”

The MUTCD is the national standard for traffic signs, signals, and pavement markings and FHWA said it will “seek input” from the general public, including state and local traffic engineers, traffic control device technicians and other stakeholders, for this upcoming update.

The agency said any proposed changes to the MUCTD – the latest edition of which was published in 2009, then updated in 2012 – is expected to be released for public review and comment in the spring of 2019.

FHWA noted that this MUTCD update effort is part of USDOT’s third round of federal guidance for automated vehicles and also represents an effort to “streamline processes and reduce burdens” on state and local agencies by adopting many successful traffic control device improvements that resulted from some of the 150 official experiments approved by the agency in recent years.

Those improvements including congestion-reduction strategies such as variable speed limits, dynamic lane control and shoulder use and pedestrian safety enhancements such as the rectangular rapid-flashing beacon and crosswalk marking patterns.

[That effort to “streamline processes and reduced burdens” is also in line with FHWA’s ongoing compliance with the “one federal decision” White House executive order from two years ago; an effort Hendrickson provided an update about during the annual meeting of the American Association of State Highway and Transportation Officials in late September in Atlanta.]

Overall, Hendrickson added that FHWA’s goal is to ensure that the revised MUTCD improve the public’s travel experience – whether driving on the interstate or in a large city, small town or rural America – and that it allows for “more flexibility and innovation” to improve travel for drivers, pedestrians, and bicyclists alike.

Separately, FHWA made $750,000 in Emergency Relief program funds available to North Carolina to help jump-start repairs to roads and bridges throughout the Croatan National Forest in North Carolina that were damaged last month by Hurricane Florence.

“Severe flooding from Hurricane Florence damaged roads throughout the state, including the region around Croatan National Forest,” Hendrickson noted in a statement on Oct. 11. “These emergency funds will expedite the repair process and help ensure that federal-aid highways and bridges open for the traveling public as quickly as possible.”

More than 40 inches of rain fell in some parts of the forest and the surrounding area, the agency added, making complete damage assessments challenging. U.S. Forest Service officials estimate the cost of repairs to be $4.5 million, but, as more complete information becomes available, that figure could climb.