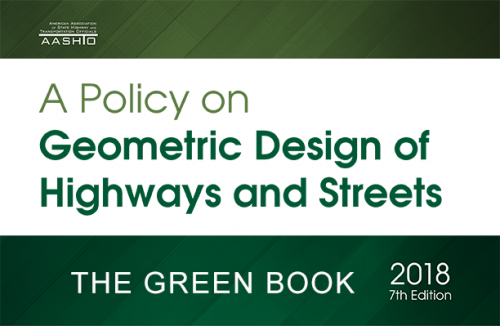 The American Association of State Highway and Transportation Officials recently released the 7th edition of its “Policy on Geometric Design of Highways and Streets” manual – commonly referred to as the “Green Book” – which is considered by many to be the pre-eminent industry guide to current highway and street design research and practices.

AASHTO said one of the major changes in this updated addition of the Green Book is a “reorganization of the “Design Controls and Criteria” found in Chapter 2, which now emphasizes “transportation of people” rather than focusing primarily on moving vehicles.

“The chapter now discusses multimodal level of service and puts greater emphasis on lower-speed, walkable, urban zones,” the organization noted. “The pedestrian walking speeds have been updated based on recent research.”

Evidence of that philosophy shift can be found throughout the updated manual. For example, Chapter 9 on “Intersections” now includes an additional table on characteristics of non-motorized users, among other updates.

The group noted that not only are “traditional” functional classifications for roadways – such as local roads and streets, collectors, arterials, and freeways – contained within the Green Book, but so is an expanded set of new “contextual” classifications – such as rural, rural town, suburban, urban, and urban core – that will help better guide geometric design efforts.

[A list of key revisions and updates to the new manual are available at: http://downloads.transportation.org/publications/GDHS-7_SummaryOfChanges.pdf.]

The “Green Book” is available to order in hardcopy or as a downloadable PDF from the AASHTO Store at: https://store.transportation.org/item/collectiondetail/180.