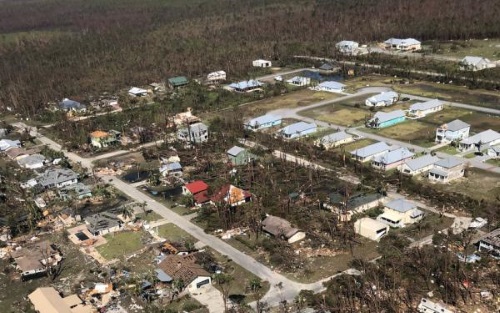 The Florida panhandle took the brunt of Hurricane Michael’s 155-mph winds and storm surge as it came ashore on Oct. 9; a hurricane that, as it travelled inland and dissipated, brought high winds, heavy rain, and renewed flooding to North and South Carolina as well as Georgia; states still recovering from Hurricane Florence, which struck the East Coast in late September.

[Aerial photo above of Hurricane Michael damage via the U.S. Coast Guard.]

The storm is the most powerful ever to hit northwest Florida, noted Gov. Rick Scott in news conference, who called it an “absolute monster” and the worst hurricane to hit the area “in a century.” According to news reports, the economic losses caused by Hurricane Michael could exceed $25 billion – making it the 12th U.S. natural disaster this year to exceed the $1 billion mark in damages.

President Trump issued a disaster declaration for Florida on Oct. 9, followed by one for Georgia on Oct. 11, where the Federal Emergency Management Agency staged more than 3,000 personnel ahead of Hurricane Michael’s landfall, with search and rescue teams that have been pre-positioned throughout Florida locations to assist with local and state response teams.

The agency added in a statement that it staged recovery supplies in Alabama, Georgia and North Carolina – with additional supplies being readied is needed – for shipment into Florida once the storm passed.

The Florida Highway Patrol shut down an 80-mile stretch of Interstate 10 on Oct. 11, which weaves through the Florida Panhandle, so work crews could clear debris, while in Tallahassee, many more roads were closed, and 90 percent of the city was without power.

On Oct. 7, well ahead of the hurricane’s landfall, the Florida Department of Transportation suspended all tolling activity and road construction activities in the northwestern part of the state via a directive issued by Gov. Rick Scott, coordinated with the Florida Highway Patrol on bridge and roadway, prepped standby generators to ensure traffic signals kept operating, issued an emergency road use permit letter to relieve size and weight restrictions for vehicles responding to Hurricane Michael, and activated regional assistance agreements in place with the DOTs in Alabama, Georgia, North and South Carolina.

The DOTs in those states also activated their own storm-response efforts. The NCDOT warned motorists that heavy rainfall and windy conditions from remnants of Hurricane Michael expected through Oct. 12 would create a “strong potential for flash flooding and downed trees and power lines” that could create hazardous driving conditions.

“The best way to remain safe during heavy rainfall is to not drive at all until the storm passes out of the state, which is expected to be by Friday morning, although residual flooding because of the amount of rainfall could continue through the weekend,” the agency said in a statement.

The Georgia DOT in particular focused on keeping traffic signals in areas affected by the storm up and running, as nearly 300 were affected by Hurricane Michael’s passage:

The agency also deployed Special Response Teams consisting of nearly 1,400 personnel statewide to deal with areas hardest hit by Hurricane Michael, crews were strategically staged in Albany, Tifton, Statesboro and Waycross. A total of 247 routes were closed, blocked or reported to have debris during the peak of the storm, including a complete blockage of the northbound lanes of I-75 at milepost 128 near Perry, which has since been cleared and all lanes reopened.

“Crews are actively working to clear and reopen any routes that remain closed. Priority routes will be cleared first to ensure the public maintains access to hospitals, trauma centers and other public facilities,” Georgia DOT noted in a statement.

Virginia Gov. Ralph Northam declared a state of emergency on Oct. 11 as heavy rains generated by the remnants of Hurricane Michael were expected to cause flooding across much of the Commonwealth.

“I want to urge all Virginians to prepare for the serious possibility of flash floods, tropical storm force winds, tornadoes, and power outages,” he said in a statement.

“I am declaring a state of emergency in order to provide state assets to Virginians and to assist our neighbors in states who are dealing with the devastating effects of this historic storm,” Gov. Nothram added. “My thoughts are with all those along with the Gulf Coast and my administration will continue our outreach to governors and state agencies where Hurricane Michael has produced widespread damage.”

As a result of that order, the Virginia Department of Transportation put its road crews on alert on Oct. 11 to handle downed trees, debris in roadways and high water caused by the storm, while also suspending ferry service in the Northern Neck region.

“Ahead of the storm, crews have been clearing drainage facilities, preparing trucks and equipment and coordinating additional debris/tree removal crews to be on standby,” the agency said in a statement.