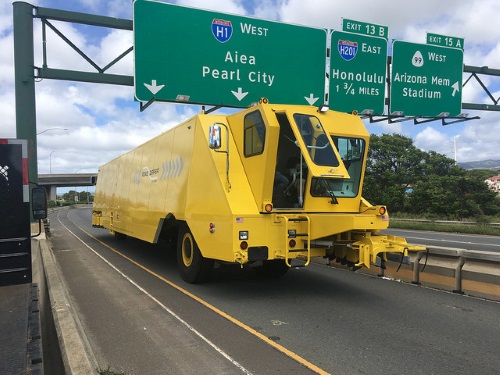 A new and improved “Zipmobile” is expected to be deployed by the Hawaii Department of Transportation in November to manage a reversible “Zipper Lane” on the island of Oahu.

[Above photo by HDOT.]

The custom machine – built in Rio Vista, California, by Lindsay Transportation Solutions at a cost of more than $1.95 million – will replace one of the two 20-year-old Zipmobiles currently in service, HDOT said in a statement. One of the machines will be kept active as a backup machine, the agency added, with parts salvaged from the other machine and stored in case they are needed.

Those Zipmobiles – machines piloted by a crew of two with a top speed of 15 mph – transfer highway barriers that provide more lane capacity for peak travel times, HDOT said.

The agency created its first Zipper Lane in 1998 and expanded it into a second lane in August 2016, which boosted road usage by more than 40 percent, increased the average roadway speed from 45 mph to 50 mph, and decreased the number of vehicles in the single occupancy vehicle lanes by approximately 2,300.

“The Zipmobile is an important piece of equipment that adds two additional eastbound lanes on the H-1 Freeway during the morning commute and helps ease traffic conditions for both carpool and single occupant vehicles,” noted Gov. David Ige in a statement.

HDOT said its 11.3-mile long Zipper Lanes are open weekdays, excluding most holidays, from 5:30 to 9 a.m. It begins on the H-1 Freeway at the Managers Drive Overpass near Waikele and feeds into the Nimitz Highway Express Lane and are reserved for vehicles carrying two or more occupants, motorcycles, and electric vehicles with a special EV license plate.

The agency added that it obtained a nearly $390,000 grant under the federal Diesel Emissions Reduction Act of 2010 from the Environmental Protection Agency via the Hawaii Department of Health to reduce the cost of replacing older higher-emission diesel vehicles with newer and cleaner vehicles – knocking the total cost of the new Zipmobile down below $1.56 million.

A few stats HDOT shared regarding its Zipmobile operation include: