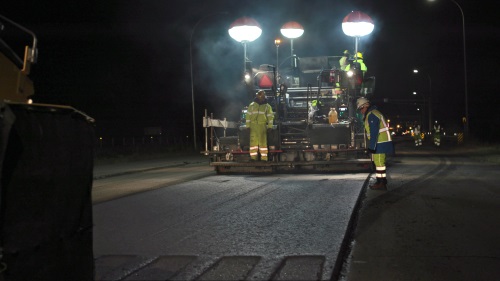 In conjunction with two private companies, the Minnesota Department of Transportation began testing a new asphalt additive on Oct. 13 along a stretch of Interstate 94 outside Albertville, Minn., near the MnROAD research facilities – an additive designed to help highway agencies and contractors use more recycled asphalt and less “virgin” products.

MnDOT said its researchers will be testing Anova, which incorporates a new class of asphalt additives called “rejuvenators” made by agricultural conglomerate Cargill and aggregate supplier Hardrives – a substance that “promises to reverse the effects of aging when the existing asphalt roadway is recycled back into the new road,” Ben Worel, MnROAD research operations engineer and project manager for this partnership, noted in a statement.

“This is an example of being able to take large steps forward in the development of sustainable, durable pavements,” he told the AASHTO Journal via email.

The expectation is that “road owners will be allowed to use a higher percentage of recycled materials back into our pavements and get as good or better long term pavement performance,” Worel explained.

“At MnROAD we used a 25 percent recycled asphalt pavement or RAP mixture and a 45 percent RAP asphalt mixture with Anova rejuvenator,” he said. “Related to cost using an extra 20 percent of RAP in our asphalt pavements will save money related to less virgin aggregates and less virgin asphalt needed because the RAP contains aggregates that are already coated with asphalt binder. So for road owners the savings using more RAP needs to outweigh the costs of the additive or additional life can be expected.”

He stressed that the use of such a “rejuvenator” this does not replace asphalt binders but is designed to allow agencies to use more RAP and then less virgin asphalt.

Susan Listberger, product line and account manager for road construction at Cargill Bioindustrial, added in an email to the AASHTO Journal that while such “rejuvenators” are not a substitute for typical asphalt binders, no special tools or equipment is needed to use them.

In the end, “that means savings for taxpayers with the same or better level of service for the driving public,” MnROAD’s Worel noted, adding that Anova may also have other benefits including acting as a “compaction aid” to allow for greater density and also allowing paving at lower air temperatures, where getting the required density sometimes is an issue. “In short it may help extend the paving season and make it easier on the contractor to produce a quality product,” he said.

Worel added that Cargill and MnDOT are also working together to develop performance tests to determine an asphalt’s ability to resist cracking as well as part of this study.

“Once this test is developed we will have the ability to determine the fracture energy or ‘cracking potential’ of a number of different mix designs to determine what ‘mixture’ has the optimum ability to resist rutting and cracking,” he said. “This will also allow road owners to determine how new technologies like Anova may affect the performance of the mix before miles of roads are placed and we have to wait five to 10 years to see if the additive made a difference or not.”

MnDOT added that this project is also expected to be “environmentally friendly” as the rejuvenator is a bio-based product, using plants rather than petroleum products to add resilience back to the recycled portion of the asphalt mix.

“We believe it’s time for the asphalt industry to look beyond recipe specifications and focus more on real-world results,” said Rob Neumann, global category leader for Cargill, in a statement. “Investments in research and development have yielded advances in asphalt technology, but industry standards haven’t always kept pace.”

This project is also part of the National Road Research Alliance, which combines the resources of six state DOTS and more than 40 private companies, universities and associations to conduct research at MnROAD.