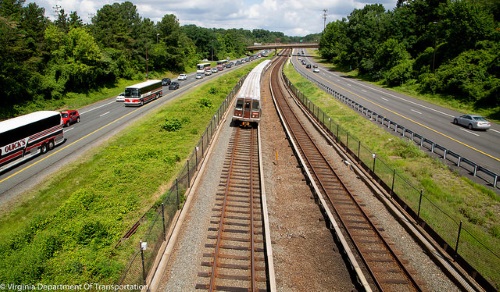 The National Capital Region Transportation Planning Board within the Metropolitan Washington Council of Governments approved a new long-range transportation plan for the area surrounding the nation’s capital, dubbed Visualize 2045, by a vote of 29 to 2 on Oct. 17.

[Above photo of Metrorail subway by VDOT.]

The group said the new plan consists of more than 600 highway and transit projects totaling $291 billion that the region expects to fund over the next 27 or so years, with new major additions to that road map including:

The board added in a statement that, during discussions before adopting the new plan, some local Maryland jurisdictions “expressed concerns” about the impact of the I-495 and I-270 managed toll lanes project on their communities.

However, those issues were addressed by the Maryland Department of Transportation, the broad said.

It also noted that the new long-range plan now includes a set of seven “aspirational initiatives” designed to help “potentially address” some of the region’s biggest transportation challenges in the future, including: