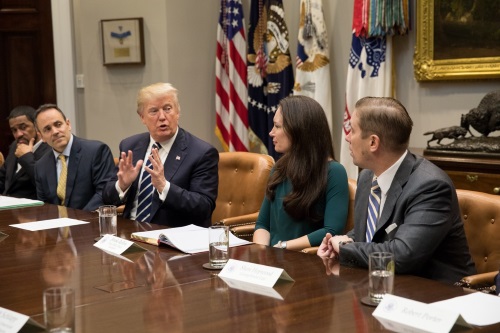 President Trump asked for a 5 percent across-the-board budget cut from each federal department during a cabinet meeting on Oct. 17; a budget cut intended to stem the rise of the federal deficit.

“I’m going to ask each of you to come back with a 5 percent budget cut from your various departments,” the president said. “Whether it’s a secretary, an administrator, whatever, I’m going to ask everybody with a 5 percent cut for our next meeting. I think you’ll all be able to do it. Get rid of the fat. Get rid of the waste. It will have a huge impact.”

The request came on the heels of a report released jointly by the U.S. Treasury Department and the Office of Management and Budget on Oct. 15 that said the federal deficit in fiscal year 2018 increased by $113 billion to $779 billion. Overall, the federal deficit now represents 3.9 percent of gross domestic product, the report noted, which is, a 0.4 percentage point higher compared to fiscal year 2017.

President Trump’s cabinet meeting primarily focused on what he called “my administration’s historic and unprecedented effort to remove job-killing regulations” and each cabinet secretary provided a summation of their department’s regulatory-reduction initiatives to date.

USDOT Secretary Elaine Chao noted in the meeting that her agency withdrew 23 regulations that, in her words, “didn’t make sense, that were nonsensical, that were overly burdensome, that were basically red tape. And we’ve added only one significant regulation that was needed, saving the taxpayers more than $1.2 billion in regulatory cost.”

She added that in 2019, USDOT plans to achieve an additional $2 billion in regulatory cost savings.

“On the horizon, the [USDOT] will also allow the safe operation of drones over the heads of people, out of the line of sight, and at night,she added. “And we are looking at pilot programs that will give us more information with which to allow this, rather than individual case-by-case waivers for a drone population that is now 1.2 million as of August 12th of this year.”

President Trump also noted during the meeting that his administration still remains focused on reducing the time required to approve roadway and highway projects.

“We’ve cut them down many, many years. And ultimately, maybe we’ll get down to one, but we are getting very close to two,” the president said.

“And in some cases, you know many stories where they’re 21 years, 22 years, 18 years, 19 years to get just approvals. And in many cases … after spending tens of millions and hundreds of millions of dollars on the approval process, in many cases they don’t even get approved after so many years,” he continued. “So we’re down to two years. We’ll very soon be down to two years, and maybe we’ll even do better than that. And they may not get approved, and that’s okay, too, but at least you’re going to know if it’s not going to happen.”