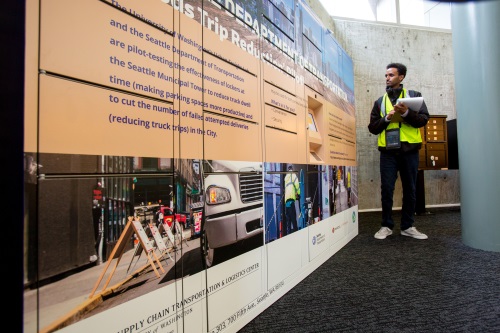 The University of Washington’s Urban Freight Lab at the Supply Chain Transportation and Logistics Center hope to launch a pilot program in Seattle to see if broad deployment of non-proprietary parcel lockers located in “dense public spaces” such as transit stations can help alleviate traffic congestion.

[Above photo by Matt Hagen.]

SCTL said it identified five locker locations at three different Seattle Link light rail stations and is partnering with the Seattle Department of Transportation, Sound Transit, and United Parcel Service for develop a potential pilot program to deploy them for parcel pickup use – though no money is as of yet available to fund such a pilot project, the group stressed.

“There are some genuine practical hurdles to putting a locker in a public space. Most academic research would stop at ‘we’ve built a model that shows that lockers should be faster,’ but we wanted to define problems and establish a framework for measuring improvement” in the real world, said Anne Goodchild, the director of the SCTL and a UW professor of civil and environmental engineering, in a statement. “Otherwise, how do we know if our suggestions are better?”

The pilot program lockers would provide truck drivers with one location to drop off packages, allowing customers to pick them up at their convenience, she added.

The group’s initial demonstration of a “common carrier locker system” in a public space examined how lockers in the Seattle Municipal Tower would affect package delivery. Their case study showed that common carrier lockers could reduce the time truck drivers spend in the tower by 78 percent.

Putting such common carrier lockers at transit stations seemed like the best next step, noted Barbara Ivanov, director of the Urban Freight Lab, as people could then retrieve packages whenever they ride the light rail. That would help reduce the number of delivery trucks that take up space on already crowded roads and idle in parking spots and loading bays – a problem compounded if no one is available to sign for a package, she said, as that delivery process must start all over again.

“This could be a brilliant idea that lowers trucks’ failed first delivery rates,” Ivanov explained. “But if the riders don’t find it convenient, then they’ll choose to have the trucks drive all over the place instead.”

The researchers said they polled city residents to see if they would be interested in picking up parcels from Link stations; surveying riders during morning and evening rush hours over five days at the UW, Capitol Hill, and Westlake stations.

For the UW station, 67 percent of the 43 surveyed riders said they would use common carrier lockers installed at the station. At the other stations, about 40 percent of riders were interested.

“It’s really hard to identify someone this is not good for,” SCTL’s Goodchild added. “It’s good for the delivery company: a locker is a more reliable receiver than you are. And that’s one less trip for you.”

Seeking out such congestion-reducing efforts is also part of the Washington State Department of Transportation’s long-term strategy to improve travel times across the region.

According to the agency’s most recent 61-page Corridor Capacity Report, it aims to “identify system performance needs, agree on performance expectations, and collaborate with community partners to evaluate and implement the most efficient and cost-effective multimodal options.”

That means “informing transportation policymakers, planners and engineers about congestion trends and congested areas, and about strategies to improve mobility on the state highway system in Washington,” WSDOT said.

And the concept of locating parcel lockers in transit stations dovetails with a rise in transit usage, which WSDOT noted in its annual capacity report.

“More people are taking transit,” the agency said. “Transit ridership on urban commute corridors during daily peak periods has increased 8 percent from roughly 88,150 in 2014 to 95,300 in 2016. Without transit, more than 4.5 additional GP [general purpose] lanes would be needed to meet demand on this stretch of I-5.”