Hyperloop Transport System ‘Most Feasible’ for I-70 Corridor, Study Finds 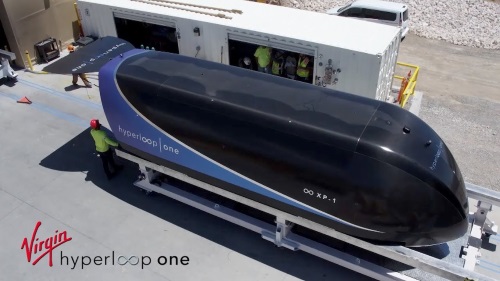 A “feasibility study” conducted by global infrastructure firm Black & Veatch reportedly “verifies” that the first long-distance route proposed by the Virgin Hyperloop One company for its high-speed passenger and freight transport system along the Interstate 70 corridor through Missouri is “safe and sustainable.”

[Above photo by Virginia Hyperloop One.]

“We worked collaboratively with stakeholders across the region to examine the technology, constructability and the economics associated with designing and building a Missouri Hyperloop,” noted Steve Edwards, chairman and CEO of Black & Veatch, in a statement. “We found this project is a case of solid engineering meeting up with Virgin Hyperloop One’s innovative vision to create a network transforming the very concept of community.”

The study “confirms viability” of the I-70 based route through what the firm called “an exhaustive examination” of the social impact, station locations, regulatory issues, route alignments and rights-of-way associated with building a hyperloop system that would connect Kansas City, Columbia and St. Louis. Key findings include:

“A feasibility study of this depth represents the first phase of actualization of a full-scale commercial hyperloop system, both for passengers and cargo in the United States,” noted VHO CEO Rob Lloyd in a statement. “The resulting socio-economic benefits will have enormous regional and national impact.”

Two other states – Ohio and Colorado – are currently studying hyperloop through in-depth feasibility studies, VHO added. In addition, Ohio is also participating in an Environmental Impact Study or EIS of a hyperloop system, while the company said Texas “intends to start” a similar process.

Originally called Hyperloop One, the company renamed itself VHO after Richard Branson became its chairman in 2017. Branson, however, stepped down from that position on Oct. 22 this year.