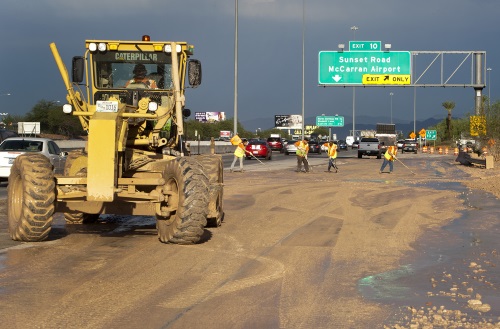 While the $3 million, 2-mile-long beautification project now underway along Interstate 515, also known as U.S. Highway 95, near Henderson, Nevada, may seem small in comparison to what the Nevada Department of Transportation typically undertakes – look no further than price tag for the completion in Late August for the “first phase” of Interstate 11 – the I-515 project illustrates a key aspect of the agency’s highway construction philosophy, noted Tony Illia, a public information officer with the Nevada DOT.

[Above photo by Nevada DOT.]

“It’s our feeling that our state highways should reflect the land and people of Nevada with landscaping and aesthetics that reflect the region’s social, cultural, and economic history. It can help forge a sense of identity and inclusion, making an emotional connection for visitors and locals alike,” he explained in an interview with the AASHTO Journal. “In this instance, it also doubles as an engineering solution by curtailing soil erosion for greater slope stabilization while channeling away storm water.”

The I-515 beautification project calls for placing 15,000 tons of decorative rock and boulders along both sides of the interstate, providing “visual enhancement” while curtailing slope erosion. Work also entails drainage improvements, including lining channel with geotextile fabric, and the entire effort is expected to be wrapped up by February 2019.

“Much of Nevada’s economy is based on tourism, so we want to make sure even our highways are visually appealing to visitors where and when we can,” Illia added. “But that also offers an opportunity to deal with the aftermath of the rain ‘deluges’ we typically experience, where we can get three inches of rain in just 10 to 15 minutes.”

In that instance, the “decorative rock” used in such beautification projects by Nevada DOT helps “wick away” the rainfall so it doesn’t damage the roadway while lessening its impact on driving conditions, he noted. “That’s why these projects serve a dual purpose; they improve the aesthetics of our highway infrastructure while also protecting them and the surrounding environment from erosion.”

Illia also pointed out that the concept of “dual-purpose” beautification projects is not new in Nevada; the state authorized setting aside up to 3 percent of the agency’s highway budget for landscaping and other aesthetic purposes almost 20 years ago. Nevada DOT then went a step further in 2002 with the introduction of its Landscape and Aesthetics Master Plan that “set the course of action,” according to the agency, for considering landscape and aesthetics throughout the life of every highway it manages.