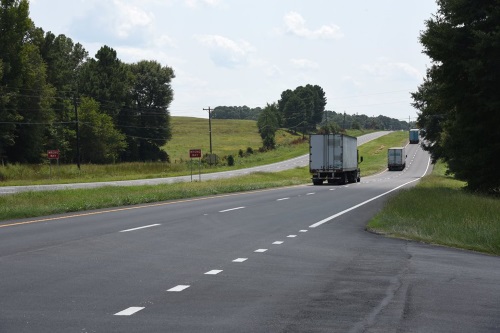 The South Carolina Department of Transportation recently got the green light on Oct. 19 to expand its interstate highway widening program; specifically aiming to widen rural sections of South Carolina’s interstate system that the agency said are “critical to the movement of freight.”

[Above photo by SCDOT.]

This effort will initially focus on widening a section of I-26 between Columbia and Charleston as well as a portion of I-95 at the southern end of South Carolina; highways SCDOT’s widening program has identified as that state’s top three rural interstate corridors.

“Trucking is the primary mode of freight travel in South Carolina and it’s projected to grow by more than 60 percent over the next two decades,” Secretary of Transportation Christy Hall in a statement.

“To close the widening gap on I-26 between Columbia and Charleston is estimated to cost about $1.8 billion in today’s dollars and to widen the first 33 miles of I-95 is estimated to cost $1.2 billion,” she added. “We must start today with identifying how to break these corridors into projects that can be advanced as funding becomes available.”

SCDOT added that its rural interstate widening program coincides with a similar plan already in motion for urban areas of the state.

The agency’s effort dovetails with a recent report issued by the American Transportation Research Institute on Oct. 18 that said congestion-related costs continue to rise for the trucking industry – costs largely concentrated on a relatively small part of the U.S. national highway system or NHS.

The group said in its report that NHS traffic congestion added nearly $74.5 billion in operational costs to the trucking industry in 2016, which is a 0.5 percent increase over the costs of traffic congestion calculated for truckers in 2015.

Yet ATRI’s data indicated that those congestion costs – based on wasted fuel and lost productivity due to shipment delays – are concentrated on a relatively small proportion of the NHS, with 86.7 percent of trucking’s total nationwide congestion costs occurring on just 17.2 percent of NHS segment miles.