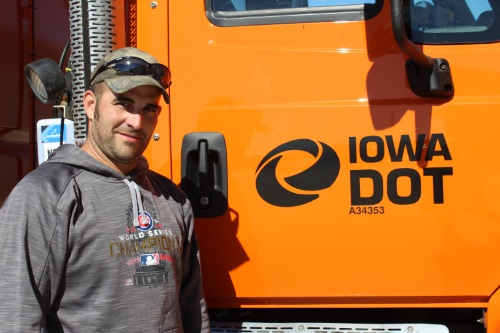 Nate Thayer (seen above), a highway technician with the Iowa Department of Transportation, is being recognized for saving members of two extended families from drowning while fishing on a day off from work June 15.

[Above photo by Iowa DOT.]

“I went by a campground and thought about stopping to ask someone there to take a picture, but I kept going and saw a large group of people on the beach. I was going to get over close to them to ask one of them to take a picture, but just when I got there I saw kids in the water and then adults going in after them,” Thayer explained in an interview on Oct. 25.

But once he realized the kids were in trouble and adults didn’t seem to be able to swim, Thayer hurried to their location in his boat. “I got there as quick as I could with the small motor,” he said. “I just started grabbing people out of the water. I tried to position myself to grab as many as I could and get them in the boat. I threw the four life-jackets I had with me into the water to help the people still out there. I took the ones in the boat up to the beach and off-loaded them and then went back out.”

Thayer also used CPR to save the life of one of the drowning victims, an 8-year-old girl. “I’m very appreciative of the CPR training I’ve had. Getting a refresher at work every two years definitely helped,” he explained. “I just knew what I had to do.”

Law enforcement officials formally credited Thayer’s quick actions with saving the lives of seven people, including the 8-year-old girl using CPR, though he downplayed his efforts in the interview. “I didn’t really say anything at work, but some people found out from the news and came up to me to shake my hand,” he said.