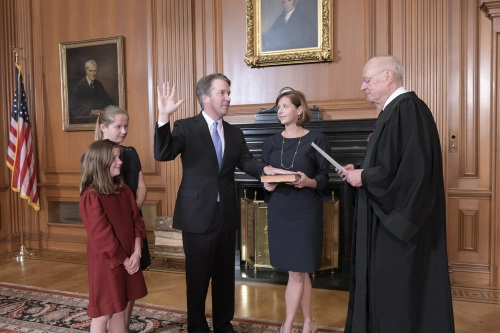 Five transportation-related cases before the U.S. Supreme Court may bear the imprimatur of newly-appointed Associate Judge Brett Kavanaugh, who was officially sworn in by President Trump on Oct. 8.

[Above photo from the Collection of the U.S. Supreme Court.]

Research conducted by the American Association of State Highway and Transportation Officials notes that these five cases on the docket for the Supreme Court’s current term not only have direct tie-ins with transportation but could have significant implications in the long term for certain parts of the industry, especially in terms of Native American tribal use of public highways for commercial activities.

This case involves John Devries and Kenneth McAfee, who served in the U.S. Navy during a time when asbestos insulation was used on its ships. Asbestos is a hazardous product that was often used for insulation on ships for many years until banned in 1977 due to health hazards posed by the material. Both of the men died of a type of lung disease caused by asbestos and their widows are suing the companies that provided engine parts for the ships involved, arguing that asbestos-containing materials were ultimately included in those engine parts after they had been delivered.

No decision has been issued in the case which was argued before the Supreme Court on October 10. –The case centers on several key questions: Does a bare-metal manufacturer need to warn users of asbestos-related hazards when a third party is the one that added asbestos-containing materials to the manufacturer’s product? And can the defendants be held liable under maritime law for injuries caused by something that the defendants did not make, sell, or distribute in the first place?

The case centers on the firing of Michael Loos by the BNSF Railway Company in 2012 for attendance policy violations. Yet several of the attendance violations involved an injury that he sustained in 2010 after falling in a train yard.

After his termination, Loos brought two claims against BNSF: a claim of retaliation under the Federal Railroad Safety Act and a claim of negligence under the Federal Employers Liability Act. The U.S. district court ruled that Loos hadn’t established a claim of retaliation under FRSA, but the claim of negligence under FELA proceeded to a jury trial, with the jury returning a verdict in favor of Loos with respect to money for both lost wages and medical expenses.

BNSF moved to offset the lost wages portion of that verdict by Loos’ share of taxes owed under the Railroad Retirement Tax Act; a motion denied in district court but that was subsequently upheld by the circuit court.

The question to be addressed by the U.S. Supreme Court is whether damages for lost wages should be considered “compensation” under the RRTA and therefore subject to employment taxes.

After Dominic Oliveira completed an apprenticeship program offered by trucking company New Prime Inc., he was advised by the carrier’s representatives to set up a limited liability company of his own so that he could work for New Prime as an independent contractor. Oliveira did so, but eventually reported that New Prime exercised “significant control” over his work that was inconsistent with his status as an independent contractor.

Consequently, he terminated his contractor relationship with New Prime and began working instead as an employee of that company but found his work responsibilities were mostly the same as those he had as an independent contractor.

Subsequently, Oliveira brought a class-action lawsuit against New Prime, alleging the trucking company violated the Fair Labor Standards Act via its contractor protocols. New Prime, in turn, filed a motion to compel arbitration under the Federal Arbitration Act; a move Oliveira opposed on the grounds that the contract is exempted under Section 1 of the Arbitration Act. He also asserted that the question of applicability of the Section 1 exemption can only be decided by a court.

Questions in this case to be addressed by the U.S. Supreme Court: When there is a dispute on whether a contract falls within the exemptions in Section 1 of the FAA, should a court or the arbitrator be the one to decide whether the FAA applies? And does that particular section of the FAA – exempting “contracts of employment” in certain industries – pertain to agreements that purport to establish an independent contractor relationship?

In Alaska, John Sturgeon operated a state-registered hovercraft on the section of the Nation River that runs through the Yukon-Charley National Preserve – but the National Park Service informed him that he was committing a federal crime by using the hovercraft in that area. Yet Sturgeon maintained that this hovercraft ban isn’t legal since the National River is an Alaska-owned navigable river.

The question to be addressed by the U.S. Supreme Court in this case is whether the Alaska National Interest Lands Conservation Act prohibit NPS from exercising regulatory control over state, Native Corporation, and private property physically located within the boundaries of the National Park System in Alaska.

In Washington State, Couger Den, Inc. – a fuel distributor that is owned by the Confederated Tribes and Bands of the Yakama Nation – imports millions of gallons of fuel into the state each year to sell to the public.

In 2013, Couger Den received an assessment from the Washington State Department of Licensing demanding a total of $3.6 million in unpaid taxes, penalties, and licensing fees for transporting fuel across state lines without a license.

Couger Den objected to this assessment, maintaining that Article III of the Yakama Nation Treaty of 1855 gives members of the tribe “the right, in common with citizens of the United States, to travel upon all public highways.” The administrative law judge of the DOL agreed that the assessment was prohibited by the provisions of that 1855 treaty.

The DOL director, however, reversed the ALJ’s decision – with Couger Den then appealing that action to the Yakama County Superior Court, which again reversed the DOL’s decision and ruled that the department had violated the tribe’s right to travel on all public highways. DOL subsequently sought review by the Washington Supreme Court. That court ruled that the 1855 treaty prevents states from taxing “any trade, traveling, and importation” by members of the tribe “that requires the use of public roads,” even those outside the Yakama Indian Reservation.

The question to be addressed by the U.S. Supreme Court in this case is whether the Yakama Treaty of 1855 allows members of the Confederated Tribes and Bands of the Yakama Nation to avoid state taxes on off-reservation commercial activities that make use of public highways.