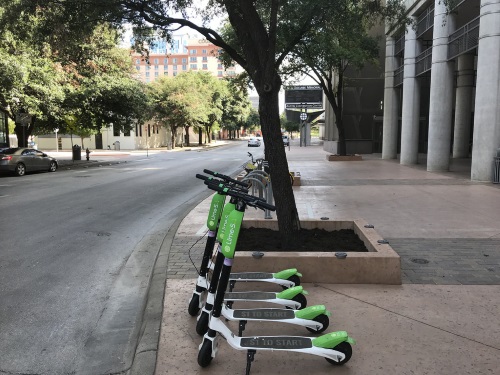 A survey of nearly 75,000 electric scooter users by the Portland Bureau of Transportation – part of the Oregon city’s 120-day e-scooter pilot program – is providing what the agency described as a “wealth of information” about how people use this new transportation option, particularly as a replacement for car travel.

[Above photo by Luis Tamayo.]

The PBOT added that is also collecting trip data from the e-scooter companies allowed to operate in Portland – Bird, Lime and Skip – as part of the city’s pilot program, which wraps up on Nov. 20. As of Oct. 11, the agency said 472,069 trips have been taken on e-scooters in Portland, with an average trip length of 1.2 miles.

PBOT said 4,500 e-scooter users responded to its survey, with the results suggesting they are becoming a “popular new transit option for Portlanders and visitors” alike. Key findings include:

Those are examples of how cities can leverage scooters to “tackle transit problems,” according to a blog post penned jointly in August by Robert Lempert, Tim McDonald, and Andrew Lohn, who are researchers working for the RAND Corp. think tank.

“Scooter firms can help cities tackle transit challenges. For example, the ‘last mile’ problem has proved an enduring one, especially in Southern California: Buses or light rail can take someone across town, but if the walk from the last station to final destination is longer than a few blocks, many people will opt to drive instead,” they explained. “Scooters could be deployed strategically to address the last-mile challenge, and firms could be rated on the extent to which they help solve it. As cities allot resources and limits, such as the number of scooters allowed on city streets, they could give preference to firms that helped most.”

Information technology – sensors, big data, the internet of things – is the key to integrating e-scooters into a city’s transportation network, the researchers said.

“So far scooter firms have optimized this technology for private gain. The companies could be impelled to use the same technology to help solve the problems their scooters have introduced,” the researchers noted. “When it comes to traffic laws, for instance, cities could require that rental scooters be self-enforcing. With their GPS tracking and wireless connectivity, the scooters already transmit their approximate location. If they were outfitted with an inexpensive motion sensor and forward-looking camera, scooters could be programmed to detect when they are being driven or parked on a sidewalk rather than a bike lane, say, or if the current rider’s weight matched that of the person whose driver’s license was provided at the time of rental.”

Privacy could be protected by keeping customers anonymous, matching riding data to riders only if an infraction is recorded, they added, with each rider allowed “a few warnings.” After that, and with privacy protections, the scooter company could determine the appropriate fine and, if the rider wanted to contest the violation, send him or her an invite to traffic court.

“But if officials rely only on 20th-century tools to integrate these 21st-century scooters into their cities, they will miss a big opportunity,” the researchers said.