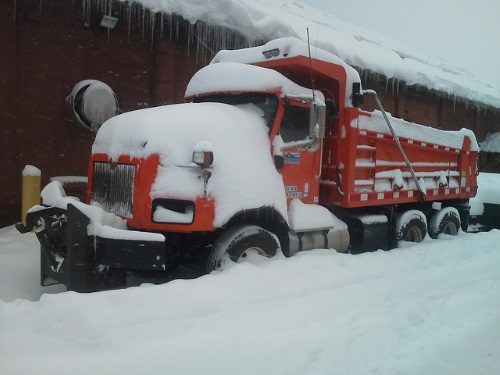 As winter approaches, state departments of transportation across the country are preparing for highway snow removal operations – with some already having engaged in storm response.

The Colorado Department of Transportation dealt with what it called a “compact winter storm system” that hit the northern and eastern portions of the state on Oct. 14, dropping what the agency called “moderate snowfall” to the I-25 corridor and “light snow” across the eastern plains.

Yet Christopher Volkert, fleet/equipment asset manager for the Colorado DOT, explained to the AASHTO Journal in a phone interview that preparing for winter is in many ways a year-round activity.

“Probably one of the key elements is our ‘off-season’ preparation,” he said. “The summer months are when we bring snow plows into the shop to conduct thorough PMs [preventive maintenance checks], work to mitigate corrosion and rust issues, plus deal with ‘ankle biter’ items to get our equipment as close to 100 percent ready for when winter arrives. Those off-season PMs are huge.”

Some equipment, such as dump trucks, do “double-duty” over the course a year, noted Volkert: hauling rock and paving materials in the spring and summer, then plowing snow in the winter. Altogether, the Colorado DOT operates over 900 plow trucks across the state, he said, though how many get deployed “is dictated by Mother Nature” in the end.

“In a blizzard, our trucks will be pushing snow 10 out of a 12-hour shift, with the remaining two spent refueling or reloading [salt spreaders],” he added. “It’s not unusual to put 20,000 to 25,000 miles a year on our trucks due to winter operations – and it could be more than that, depending on snow volume.”

[Operator training is also key to effective use of snow removal equipment, as explained in the video below from the Nevada Department of Transportation.]

Snow operations don’t come cheap, either. The Pennsylvania Department of Transportation, for one, has budgeted $228 million to fund statewide 2018-2019 winter operations; funding that covers the cost of operating 2,200 department-owned and rented plow trucks, deploying about 4,500 on-the-road workers, and the price tag for 620,000 tons of salt now on hand across the state, as well as to purchase further salt deliveries throughout the winter on an as-needed basis.

PennDOT noted in a statement that the 40,000 miles of roadway it is responsible for translates into 96,000 “snow-lane” miles; calculated by multiplying miles of road by the number of lanes, which means a one-mile section of four-lane roadway would equal four snow-lane miles. When winter weather hits, PennDOT said its primary focus is on interstates and expressways, with equipment “redirected” to those routes during significant winter events.

“The more traffic a roadway has, the more attention it will receive from plows, so motorists may find deeper accumulations on less-traveled routes and should adjust their driving for those conditions,” the agency said.

State DOTs are also stepping up training activities ahead of the winter season, as well. The Missouri Department of Transportation, for example, tested its “snow plow” readiness with a 7-hour statewide drill on Nov. 7 that involved 3,500 agency employees “reacting to a simulated forecast of significant snow” for the entire state.

Becky Allmeroth, a state maintenance engineer with MoDOT, said the agency activated its emergency operations centers and communication system as part of the exercise, deploying crews to their trucks as well.

MoDOT noted it spends about $43 million each year to keep roads clear in the winter and help ensure motorists get to their destinations safely and quickly. In an average winter, its employees plow about 6 million miles of snow and ice, the agency said.

“The annual drill helps to make sure we all know our roles during a winter storm so we can do our jobs successfully,” Allmeroth noted. “Careful planning and preparation mean our crews can mobilize when needed, and our equipment will be ready.”

“The amount of money and resources spent on winter operations can be staggering but agencies are committed to maintaining mobility during bad weather,” explained Rick Nelson, coordinator for the American Association of State Highway and Transportation Official’s Winter Maintenance Technical Service Program, known as “SICOP.”

“We conducted a survey to determine the top 10 things for an effective winter maintenance program and having sufficient budget was right at the top,” he noted in an email to the AASHTO Journal. “Winter always wins the budget war; sometimes at the expense of other maintenance activities.”

[Editor’s note: SICOP is a resource for states as they fulfill their winter maintenance mission by promoting proven strategies through a variety of traditional means, such as the SICOP website http://sicop.transportation.org, as well as via social media such as the Facebook group “Winter Operations” and the podcast “SICOP Talks Winter Ops” at http://sicoptalkswinterops.com. “The demands on a maintenance manager’s time can be overwhelming, which is why SICOP has moved to these new avenues for technology transfer,” Nelson said.]

“Once a truck comes out of service out of storm, it is covered with ice and snow and the material we put down to mitigate it,” he noted; material that is typically liquid calcium chloride. “You need to get that cleaned off because it [liquid calcium chloride] and steel don’t play nicely together – it sets stage for rust very quickly. It is important to wash the undercarriage, dump beds, frame rails, and clean off electrical wiring.”

Volkert added that the agency’s fleet uses vehicle lubricants specifically formulated to help “shed” those corrosive chemicals. He also noted that some of Colorado DOT’s maintenance facilities are equipped with indoor “wash racks” with pressure washers and cleaning additives to help neutralize the road salt corrosives. “But if we are at a facility without a modern wash rack, we have to be careful when we time that cleaning,” he stressed.

Finally, many state DOTs are starting to contract for weather forecasting services so they can get a jump on storm-response activities.

“This year, our maintenance office has contracted with a weather forecasting service to provide all Iowa DOT employees video forecasts twice a day, available on the service’s website,” explained Tina Greenfield, with the Iowa Department of Transportation’s office of maintenance, in a statement.

“We’ve always had a text forecast available on the weather forecasting service’s website, but it wasn’t very prominently displayed and was really geared towards those of us who needed specific details on upcoming storms,” she added.

“Near the end of last winter, we were having conversations … realized that many [DOT] folks weren’t getting a warning of storms,” she said. “So we worked with our vendor to get a video format like what they provide other customers in place for us this winter.”

The new video format is geared toward those employees who need an overall, statewide perspective on what weather is coming, Greenfield said.

“There are several offices like strategic communications who can start planning messages for the public in advance if they are aware of what’s coming,” she added. “The Traffic Management Center needs general information to make staffing decisions in preparation for potential winter driving incidents. They don’t necessarily need all the details, but they can use the general information to better complete the tasks they are responsible for. With an easy-to-view forecast, hopefully, the upcoming storms won’t take anyone by surprise.”