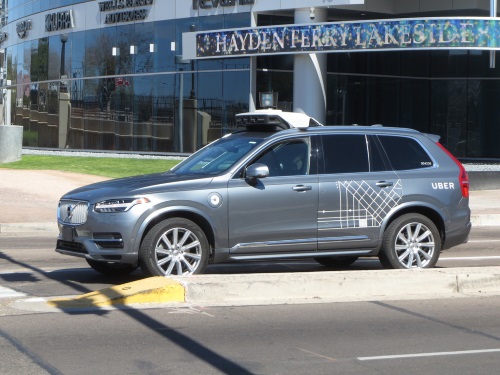 Uber issued a 70-page safety report in early November to help it win approval for restarting self-driving vehicle pilot tests it suspended in March following a fatal accident during nighttime tests in Tempe, Arizona, which killed a pedestrian.

[Above photo by Uber.]

“We recognize the importance of earning the trust and confidence of both the public and various levels of government in support of successful development and deployment of self-driving vehicles,” noted Dara Khosrowshahi, Uber’s CEO, in the report.

“We are committed to earning and maintaining that trust with our stakeholders – riders, government officials and policymakers, non-governmental advocacy and interest groups, industry, partners, employees, and the general public, which includes riders, drivers, and couriers on the Uber platform.”

He said Uber believes the most “effective approach” to building trust is to provide “regular, consistent, accessible information” regarding its autonomous vehicle development efforts and business plans, plus the potential impacts of said operations on local communities where they are operated.

To that end, to ensure its self-driving system stays within its operation design domain or ODD, Uber is “constraining” the routing capability of its self-driving vehicles while also ensuring that human “mission specialists” on board the vehicle can take manual control when needed.

“Mission specialists are prepared to take manual control of the vehicle when presented with a scenario that is not included in the current ODD,” Uber said in its report. “When one of our vehicles encounters a situation which the mission specialists know it is not yet capable of navigating in self-driving mode – [such as] a road blockage or closure – the left-seat mission specialist or ‘pilot’ is trained to take manual control of the vehicle and the right-seat mission Specialist, or co-pilot, is trained to report the blockage.”

Khosrowshahi added that such protocols are aimed at ensuring that “stakeholders” can access “high-quality information” on Uber’s self-driving technology in order to make “informed decisions” about use and regulation of self-driving vehicles.

State departments of transportation are also imposing similar safety protocols as many continue ramping up efforts to test such vehicles.

For example, the Illinois DOT’s new autonomous vehicle program – launched on Oct. 25 –  requires a driver to remain behind the wheel, capable of taking control of the vehicle at all times.

“We want testing to happen here in Illinois, but we want to do it safely,” noted Illinois Transportation Secretary Randy Blankenhorn in a statement. “We want to bring our state’s impressive resources together to build a system of transportation that moves people and goods in new ways and puts us at the forefront of innovation.”

The Illinois DOT will be overseeing “Autonomous Illinois,” which involves the Illinois State Police, Illinois Tollway, Department of Insurance and Department of Commerce and Economic Opportunity, in connecting communities interested in connected and automated vehicle testing with industry, universities, research institutions and other technology partners.

The Illinois DOT added that connected and automated vehicles or CAVs are expected to generate an estimated $800 billion annually in economic benefits by 2050 for the United States as a whole, which includes the creation of jobs, increased productivity for motorists, and fuel savings. They also will help reduce the number of crashes – 94 percent of which are caused by human error – that result in more than 1,000 deaths in Illinois and a negative economic impact of $14 billion a year, the agency said, according to the most recent data.