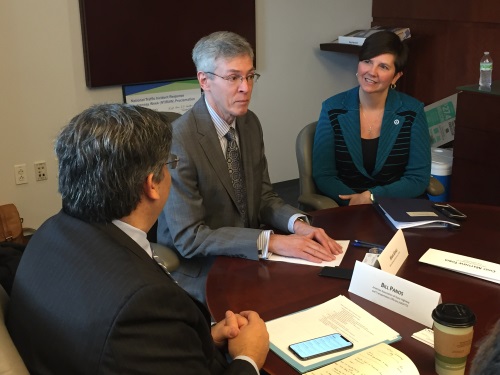 The agency noted that “traffic incident management” is a concept that encapsulates the process of coordinating the resources of law enforcement, fire and rescue, other public agencies, plus private sector companies to detect, respond to, and clear traffic incidents as quickly as possible from roadways to reduce congestion, while protecting the safety of on-scene responders and the traveling public.

“Our goals are to continuously improve the safety of responders and road users while improving the reliability of travel and the efficiency of incident and emergency response through the ‘institutionalization’ of TIM programs across the country,” said Paul Jodoin, a transportation specialist with FHWA’s emergency transportation operations team. “The future goal is to get the majority of states to implement a formalized statewide multidisciplinary TIM organization with regional coordination.”

[Side note: The coordinated multi-disciplinary responder training program developed through the second Strategic Highway Research Program or SHRP2 is now available for all emergency responders and those supporting TIM operations. The curriculum is available online at http://www.trb.org/Publications/Blurbs/166877.aspx, while registration for the web-based National Traffic Incident Management Responder Training is available at https://www.nhi.fhwa.dot.gov/course-search?course_no=133126.]

Brandye Hendrickson, FHWA’s deputy administrator, noted at the meeting that nearly 400,000 “incident responders” have received training through the TIM program and that the “business case” for the program remains the same: improve safety for incident responders, and the safety of all road users, while mitigating congestion and improving the flow of commerce.

Mark Kehrli, director of FHWA’s office of transportation operations, noted that there is “strong consensus” to continue TIM programs for the long term, but that they may need adjusting for autonomous vehicles. “They are game changers,” he said.

Yet William “Bill” Panos, director of the Wyoming Department of Transportation, noted during the meeting that there is a “strong return” in marrying TIM training philosophies to the development of connected and autonomous vehicles or CAV technologies.

“My interest in CAVs is very focused: it is not just technology for technology’s sake, it’s about saving lives,” he explained. “Wyoming is a state with 500,000 people that is the size of Great Britain. That means our average response time [to a traffic incident] is 40 minutes. So we lose a lot during that 40-minute window – our job is to cut that down and make that smaller. That is why we are TIM training – not just law enforcement [personnel] but highway maintenance workers and others.”

Panos, who also serves as chair of the committee on transportation system operations for the American Association of State Highway and Transportation Officials, added that by using CAV technologies to link vehicles to one another as well as to highways and related infrastructure, incident response times can be accelerated – and may even help eliminate traffic incidents altogether to a large degree.

“Snow plows, state troopers, emergency personnel, and maintenance vehicles will all be connected to the road – they will all know instantly that 200 miles ahead a crash occurs the moment it occurs; that data gets pushed into their vehicles,” he said. “And it’s not just about crashes; it is about weather. We can alert motorists to non-crash weather events and work zones as they are put down and taken up. What a remarkable thing. And it is not something from the future; it is happening now and TIM will be an important part of it.”